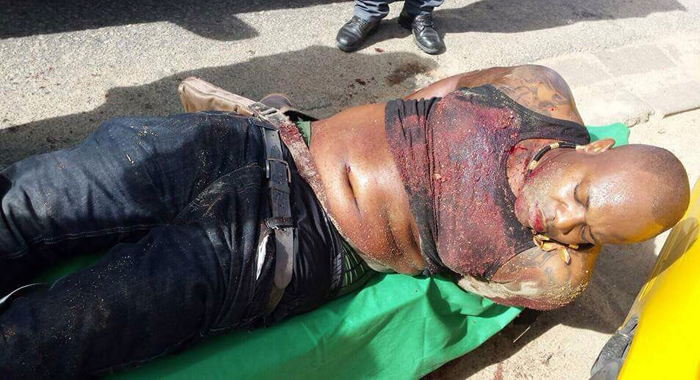 PARAMARIBO, Suriname — Romano Meriba, 31, foster son of Suriname’s president Desi Bouterse, was arrested Friday in Paramaribo after he turned himself in to.

The Public Relations Department of the Suriname Police Force released a statement confirming the arrest. Police say Meriba was arrested by officers of the Capital Offenses Department, the police unit which investigate serious crime, including armed robbery, murder, drug trafficking and money laundering.

“Romano is believed to be a member of the gang that was involved in a robbery in Paramaribo-North,” the Suriname police said.

The release further stated that Meriba became a suspect after preliminary investigations revealed that his vehicle was involved in the said armed robbery.

During a shoot-out with police units including the SWAT Team, two robbers were shot dead Monday, while three others were seriously wounded.

During a search at a home in the Zorg en Hoop neighbourhood, detectives found a car belonging to the deceased suspected robber Melvin Tob. Police also seized several firearms and a motorbike during the businessman’s arrest.

Mere hours after the shoot-out Monday, Meriba appeared on radio answering questions about whether his car was used by the bandits during the robbery as one of the getaway cars.

Claiming innocence, Meriba disclosed that he lent his vehicle last week to a friend to move items to a new apartment since the said friend was relocating to a new address.

Noting privacy reasons, Meriba said he wouldn’t disclose where he was during the robbery.

He argued, however, that he will assist police during the investigations.

In 2005, Meriba was sentenced to serve a 15-year prison term for robbery and killing of a Chinese shop owner in 2002.

He shot the businessman point blank through the rear window after the man had jumped on the trunk of the getaway car.

Meriba was also sentenced for throwing a hand grenade in 2002 into the residence of Ruud Treffers, the then Dutch ambassador in Suriname.

Bouterse, who became president in 2010, pardoned Meriba in December 2011.

Bouterse at that time defended his decision after protests from the opposition, saying that the Court of Justice had already sanctioned the early release in March 2011.

In March 2012, Meriba was arrested in Paramaribo accused of assaulting and beating up a police officer and a patron in a nightclub.

Meriba remained for a short period in lock-up since his alleged victims retracted the complaints the following day.