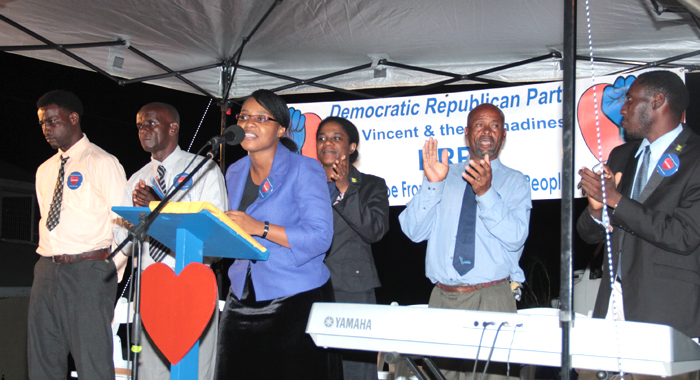 The small Democratic Republican Party Wednesday night announced its slate of candidates who will contest the Dec. 9 general election.

In North Windward, the DRP’s George Byron, will join Lauron “Shera” Baptiste of the NDP in trying to unseat Montgomery Daniel, who has been representing that district since 2008.

Prime Minister Ralph Gonsalves will face a challenge from the DPR’s Haran Grant, as well as the NDP’s Kenroy Johnson in North Central Windward.

That constituency will have a new representative, as the incumbent, Clayton Burgin of the ULP, has been replaced by Sen. Camillo Gonsalves.

Sen. Linton Lewis of the NDP will make a third attempt to win the seat, his fourth attempt at becoming an elected MP through the St. Georges constituencies and Ivan O’Neal of the SVG Green Party will also try to get the voters’ nod.

Leader of the Opposition, Arnhim Eustace will face a challenge from the DRP’s Karima Parris, as well as Luke Browne of the ULP in East Kingstown.

And in South Leeward, Wendel Parris will join the ULP’s Sen. Jomo Thomas in trying to unseat the NDP’s Nigel “Nature” Stephenson, who is seeking a second term in office.

“I am so grateful to all of you who have taken the bold and courageous stand to offer yourself to service,” Baptiste said at a rally at Fountain Gap where the candidates were announced and the party launched its election manifesto.

“It is not easy in the climate in which we exist, where we are accustomed to two major parties but I want you to understand that the people of this country are beginning to realise that the two major parties have failed us over the years even though they have done some good and it is time for a brand new alternative in the Democratic Republican Party,” the 35-year-old political leader said.

“There comes a time when we have to change and change meaningfully and change for the better. And the DRP offers that change because we are founded on the philosophy of republicanism, which emphasises protection for the rights and freedom of the people,” Baptiste said.

The DRP was founded in 2012, months after Baptiste was fired as an NDP senator.

The announcement of the candidates came just two days before Nomination Day, Friday.

Fifteen seats are up for election in the December poll.

Four political parties are expected to contest the elections, but political observers say the vote is expected to be a straight race between the incumbent Unity Labour Party, which is seeking a fourth consecutive term, and the NDP.

The SVG Green Party is also expected to contest the elections.