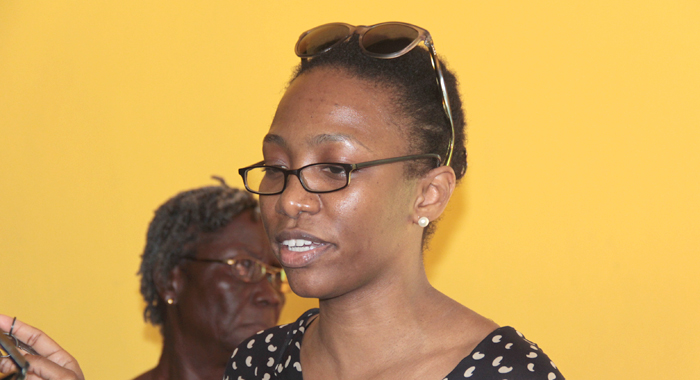 Lawyer, Maia Eustace, is questioning the emphasis on the woman whose voice appears in a sex tape involving a male whose voice is strikingly similar to a prominent official of the ruling Unity Labour Party.

“… leh me say one thing on behalf of women, whether it’s Madonna Barbour or any of the beautiful women here tonight: why is it that in St. Vincent and the Grenadines, every time there is a recording of some sex act, yo’ only ever focus on what the woman did?” she told a rally of the New Democratic Party in Walvaroo on the weekend.

Barbour is the mother of the woman, said to be 26, who voice allegedly appears on the sex tape.

“The woman is not alone. All of us are here by virtue of a comingling of a man and a woman,” said Eustace, who is daughter of NDP head, Leader of the Opposition, Arnhim Eustace.

“Why is it that we take our gaze completely off the person who has put themselves forward as a moral and political leader of this nation and focus it instead on a young woman who could barely make ends meet. As women, and as the sons of women, we must never allow this to happen in this country,” Eustace said.

There has been much emphasis with Joseph Burns Bonadie, an activist for the ULP, mentioning what he said is her name and travel details on radio shortly after the tape began making the rounds on social media earlier this month.

While persons say they have been able to identify the woman by her voice, they claim that the male voice, who many agree is strikingly similar to a ULP official, is not the official’s real voice and may have been generated digitally.

“Every time there is a sex tape, if it’s school children, ‘Oh, the school girl bad. Alyo see that schoolgirl? Yo’ see how she behave?’ Does that make sense to any of us? The schoolgirl was acting on her own?” Eustace said as the crowd shouted “No”.

“Then why you only focusing on her? Let us give women their due and let us also defend women when they need to be defended,” Eustace said.