‘Nastying up’ of Sion Hill is ‘an absolute disgrace’ 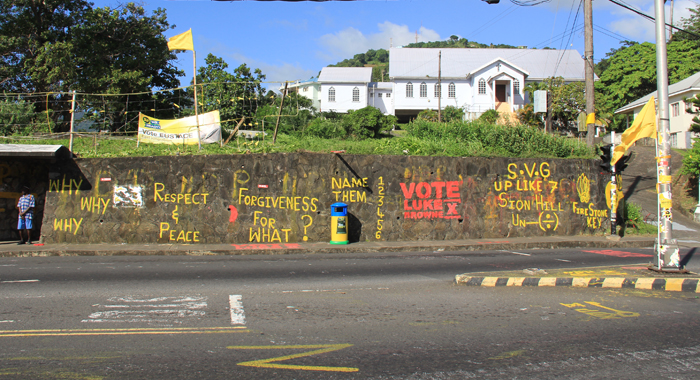 The defacing of the Sion Hill intersection with election graffiti is a “national disgrace”, Prime Minister Ralph Gonsalves said this week.

The picturesque roadway had become an eyesore after messages in support of both the ruling Unity Labour Party (ULP) and the main opposition New Democratic Party (NDP) were painted onto the roads and retaining walls there.

Speaking at the signing of the Code of Conduct to govern the election campaign this week, Gonsalves said he does not like “the nastying up of the country”.

“What is happening at Sion Hill is an absolute disgrace,” he said, adding that his government is hoping to get an entity to attempt to power wash the graffiti away.

“That intersection is too important and the wall too sacrosanct to be desecrated in the manner in which it has been desecrated,” he said.

Gonsalves said he has told Sen. Luke Browne, the ULP’s candidate for East Kingstown, where Sion Hill is located, that he does not want any marking up of the intersection.

“It has to be said that he did a few. It’s not a question that they are far more tastily done,” Gonsalves said.

The Prime Minister said that this type of campaigning is “so 20th century”.

He noted the availability of other campaign avenues, including radio, television, social media, billboards, and music.

“You can’t do that and we have taken a position that that should not be done. And I have had meetings with persons asking them not to engage in this kind of activity. We can use our energies much better,” he said.

Several other areas of the country have been similarly defaced, including in the North Leeward town of Chateaubelair.