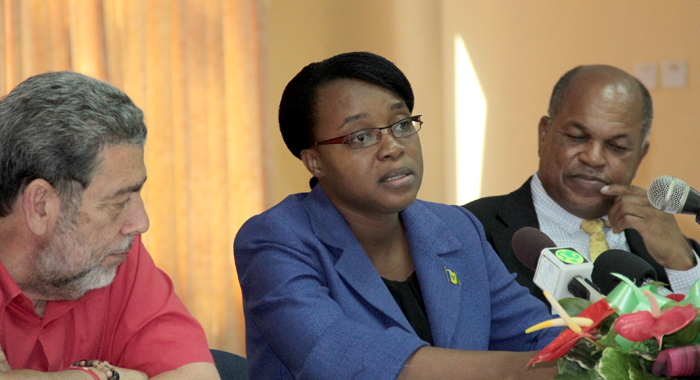 From left: Prime Minister Ralph Gonsalves of the ULP, Anesia Baptiste of the DRP and Sen. Linton Lewis of the NDP at the signing of the code of conduct on Tuesday. (IWN photo)

Three of the four political parties contesting the Dec. 9 general election have promised to conduct peaceful campaigns and have signed a code of conduct governing the electioneering even as one party expressed concerns that the campaign could become “nasty”.

“I want, most of all, to declare that we will be peaceful on this side of the ULP, we will be clean, there will be no violence from us and we will not participate in anything that engenders violence. And if any of our supporters engage, we will encourage them to refrain from same,” said Prime Minister and Political Leader of the ruling Unity Labour Party, Ralph Gonsalves, at the signing ceremony on Tuesday.

He said there has been all sorts of interpretation of the Nov. 7 speech in which he announced the election date, but added that there is one interpretation.

Gonsalves said he wants that at the end of the election the people can say they have been involved in an exercise of which all can be proud.

He said the campaign will continue to be robust with lots of picong and Caribbean humour but that does not mean that picong has to degenerate to the gutter.

“And there are some who report on the news who are themselves involved in making the news, and they must question their own hearts and minds. They are not party to this, but they must ask themselves also, what they are doing, if it is right. I don’t have to quote chapter and verse,” Gonsalves said in a seeming interjection that left the press corps at the event confused about his meaning.

Anyone who has been coming to meetings of the ULP would see that they have been orderly and disciplined.

However, ULP supporters have harangued journalists at the party’s rallies and at least one spokesperson for the party attempted to justify the behaviour of party supporters in this regard when it was called to his attention on the party’s radio station.

Separately, an NDP supporter, displeased with a reporter’s questions to party official at NDP press conference last week, accosted the journalist after the media event.

The Prime Minister spoke of the incidence of violence in Petit Bordel last Friday and said there is no doubt in his mind, and from all reports, that persons in support of the main opposition New Democratic Party  (NDP) rained bottles on ULP supporters in the North Leeward village.

Gonsalves said that he was not saying that the NDP leadership directed the incident.

“Thank God no one was seriously injured — scratches, cuts and so on. But if we don’t follow this code carefully, there is a danger that that this election can turn nasty,” he said.

Chair of the NDP, Sen. Linton Lewis, who signed the code on behalf of his party, said the NDP will continue to have peaceful meetings.

He said NDP supporters have passed on a number of occasions in some areas and have had ULP slogans shouted at them.

“They are always very provocative, hostile, aggressive — something that you do not see with the New Democratic Party,” Lewis said of ULP supporters.

He said there may be the “the odd responses” from NDP supporters, but it is something “which is the order of the day by supporters from the Labour Party”.

Lewis said he was happy to hear Gonsalves say that he does not support that sort of provocation.

“But there has been clarion calls by the Prime Minister in recent times that that ought not to be done. So, I expect that to be led by example,” he said.

Leader of the fledgling Democratic Republican Party (DRP), Anesia Baptiste, said she has accepted to sign the code of conduct because she has read it, discussed it with her party, and agree to the principles outlined in this Code.

She said the majority of the principles and regulations speak to candidates.

“I would also like to commit to encouraging a violence-free election…” Baptiste said, adding that she would like to remind candidates of the importance of their pronouncements on platforms and other political activities.

Baptiste noted that the Code says that candidates shall address themselves to issues and principles dealing with national growth and development and the real concerns of the people.

“We at the DRP are committed to doing that,” he said.

The SVG Green Party opted not to sign the Code but sent representatives to observe the proceedings.

The National Monitoring and Consultative Mechanism and the SVG Christian Council will monitor political parties’ adherence to the Code, which has no enforcement provisions.