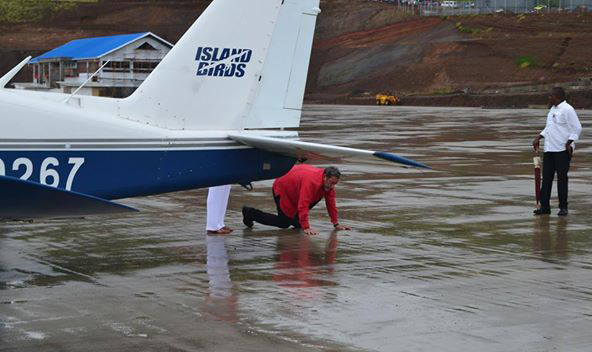 On Saturday, November 14, 2015 at a ULP election rally in Arnos Vale, Gonsalves told the attendees: “There is going to be a small plane, which is going to do a test flight, testing the approach lights at the Argyle International Airport. And I have asked them if they will allow me to come on that flight, and I ask them if I can bring along the Humble African.” The African he was talking about was Frederick Stephenson — “The Humble African” — who is MP for South Windward, where the airport is located.

This was basically an untrue statement by Ralph Gonsalves, a great big lie mixed with a little truth.

The flight from E.T. Joshua Airport at Argyle to the unfinished and unlicensed Argyle Airport was simply to attend a ULP election rally on the terminal building aircraft apron on November 19.

A tented stage with speakers and public address system had been set up on the apron. The aircraft had two ECCAA officials [a man and a lady] on board simply going to a fete. In fact, the lights had not been calibrated by readings or data from any aircraft up to this time; certainly not this one.

The flight that Gonsalves took to the Argyle Airport was not a flight to test the approach lights at all. It was a charter flight to carry, his family and others to Argyle so he and they could be the first to land there, and to hold a ULP election rally perhaps at the expense of some other body than the ULP.

There was no technical checking of the lights at all. In fact, the lights were not properly approved operational and adjusted for the landing of any of the four aircraft that landed at Argyle on the 19 of November 2015. Only that morning a generator was linked to the lights to power them on because they had not and still do not have a direct power supply to them.

Prime Minister Ralph E. Gonsalves just cannot stop telling lies, even when there is no need to tell lies, because the truth would be accepted and received better than his lies. What in Hell’s name is wrong with him. Yes, I associate Hell with him because only the damnedest of men would continually tell such lies.

The same aircraft N40267 turned up on Friday 20 November 2015, landed and took off several times whilst in between engineers adjusted the lights several times, which is a critical procedure and took some best part of the day: 9 a.m. to 1.30 p.m.

Is there such a thing as a good liar? I suppose not. But there are liars that rarely get found out and they are described as good liars. Every lie Gonsalves has told has been found out, at least by me they have I have been able to distinguish every one of his lies. Does that make him a bad liar, the answer is yes and yes? Maybe his family knows that he lies but accept him for what he is. Or perhaps he tells them a bunch of lies and they just don’t know when he is lying. Who knows? Who cares? Well I do and so do thousands of decent Vincentians. Of course, there are those that know him as a liar and admire him for his “liarability” because they are of the same ilk. There are some who follow and support him, admiring him for the evil web of lies he weaves to achieve his political aims. There are most certainly those who accept anything that he does or says, because they rely on him for financial reasons, many such known cases are regarded as disgraceful and abysmal by some of the decent citizens in the know.

Gonsalves told the people “I sometimes tell lies” and he does, but it’s not sometimes; it’s all the time. He told us “show me a liar and I will show you a thief”. Does that equation of his include him, because he said it and he admitted that he is a liar? I suppose telling lies is a kind of thievery because each lie told is theft of the truth. Each lie told is also deception because lies are told to deceive.

Please keep reading because it gets better, or worse depending on your point of view or opinion of such despicable behavior.

So why did Gonsalves lie about the reason for the aircraft landing at Argyle on the 19th? Because he knows he is losing the confidence of the Vincentian people and they (I do not know who they are) hatched a plan to deceive the Vincentian people into believing that he had hitched a ride on the airplane doing the tests. That was just the beginning of the lying and deception process in this matter. After that all ULP supporters were told by their representatives to attend the rally at Argyle wearing their red outfits. All ULP supporting employers, I am informed, instructed their workers to attend the airport on the afternoon of Thursday the 19th in support of the event. Kelly Brownnose also landed his aircraft at the unlicensed, un-approved and unfinished runway, a runway which had at the time of landing two serious flaws in the surface, what will his insurance company think of that? Much of the crowd were supporters, but part of them were people given an afternoon off for a ULP jolly-up at the airport, rent a crowd, even demand a crowd.

A tented stage and sound system had been set up on the apron. The press and TV were invited. The happening was reported far and wide regionally and online worldwide. It was by far Gonsalves and the ULP’s most successful election rally and was most probably paid for by the taxpayer because it was deceptively described as something it was not.

The runway is still a third unpaved, there are no runway lights installed, there is not and will not be a radar system installed. The tower will rely on powerful binoculars and radio contact for its communication with aircraft. The fencing is still 70 per cent unfinished; cows, sheep and goats along with dogs and people are still wandering parts of the airport. There are quite a few homes on the seaside of the airport, also a small resort, which, at the moment, has to rely on driving across a muddy section of the unfinished runway to reach their properties. The promised perimeter roads for these people do not yet exist. The original owners of much of the land that the airport is built on, some 61 of them owning many acres, still remain unpaid seven years after it was due. The fuel farm, which was to be built in the sea, has been moved to a very dangerous position very close to the main highway on a hillside. The Cubans will have taken 10 years to build a 3-year project and the airport is more than 30 minutes from a casualty hospital, which is a requirement. In fact we do not have a real casualty hospital at all. The Venezuelans, according to the doubtful word of Gonsalves, promised to pay the wages of the Cuban workers, they did not and it has cost us over $300,000 a month for more than seven years. There are no sea rescue boats and none to be provided, there are no helicopters to carry people to hospital and none to be provided. In fact there is not a single helicopter of any size or shape whatsoever located anywhere in SVG. The hospital cannot cope with a minor incident never mind a major accident. There are still no drugs and dressings in the small clinics located in some of the villages, and most of the time none in the Kingstown hospital. We have no doctors or nurses anywhere in SVG trained in such emergency and trauma that can result from an aircraft accident. We have no burns unit and a large number of people with broken limbs would have to wait weeks for X-rays. All in all, the airport is based and built on Gonsalves lies embroidered and passed on by his hangers on.

We were told that the airport was being paid for by a combination of countries which Gonsalves described as the “coalition of the willing”. It turned out there were no coalition of the willing. We have had to sell most of the land in Bequia to foreigners, but some of those involved in the selling of that land cherry-picked the best locations resulting in many plots remaining unsold. Gonsalves has begged worldwide with little result whilst flying around the world at great expense with family and entourage, spending millions over the years. The country has been destroyed whilst Gonsalves tells more and more lies. When he took power there was $300 million deficit, today that approaching or beyond $2 billion, we do not know exactly because no figures are released and those that are cannot be relied upon.

Do you remember a very few months ago when Kingstown was ablaze and there was fear of losing the whole city? The solo city fire engine turned out but it proved almost useless because of the general condition of it, also its leaking hoses plus fire hydrants that did not work. Well it was asked then why could the new fire engines being stored for the Argyle airport be used? Gonsalves explanation was that the agreement with the selling agents was that the warranty started when they are put them into service so they could not be used. But can you guess what? All of those engines were fired up, the tanks filled and foam chemicals inserted, then driven from Kingstown to Argyle to stand at the airport whilst planes landed for the ULP Election rally on the 19 November 2015. So the warranty can be brought into play to protect Gonsalves whilst landing there, but Kingstown can burn down. I suppose it was only government buildings stuffed with state records so let it go, Joe; fan the flames.

Why not just give us truthful information without telling lies? Gonsalves announcement about the landing of the first aircraft at the Argyle International Airport was riddled with lies and pretense. Why did that have to be? Because everything he does has to be draped in dramatics and he cannot help embroidering what he tells us. It is well known throughout the Caribbean that he is a liar because he told us so, but he is a crap liar because most of us know when he is telling lies, he is easily found out; we also know he is a brilliant actor, to Emmy Awards standards.

Let there be no doubt whatsoever this event on Thursday 19 October 2015 was an election rally, nothing more, nothing less.

It’s such a shame that so many professional people went along with the sham and have put their positions, perhaps their futures on the line. In fact, I have just read the speech made at Argyle by the ECCAA Chief Donald McPhail and was absolutely horrified by it. I was also horrified by the ultra political speech by Rudy Mathias the airport company CEO, but at least he exposed some other past mistruths by the comrade during that speech.

It is most obvious you do not fly four aircraft full of ULP dignitaries and have a gathering of several thousand people give political speeches then not adjust the lights and expect us to believe it was all taking place to test four lights. As I said before it was nothing more and nothing less than an election rally.