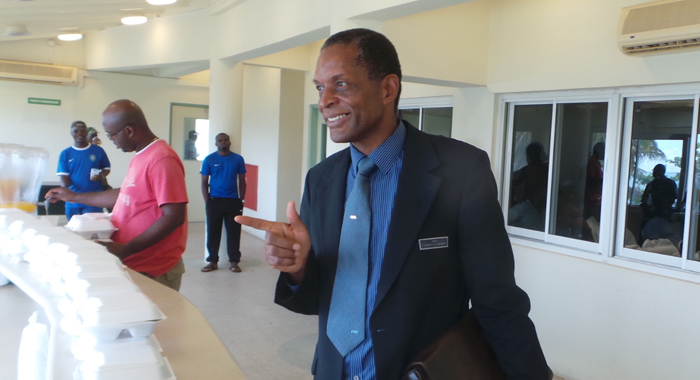 Venold Coombs, seen here after his re-election as SVGFF president in November 2015, has been banned by FIFA from all related activities for two year. FIFA has also fined him US$40,000. (Photo: E. Glenford Prescott)

Newly re-elected president of the St. Vincent and the Grenadines Football Federation (SVGFF), Venold Coombs, is confident that the sport will go to higher heights in his second term.

Coombs on Saturday brushed aside a meek challenge from Roddy Dowers en route to a second consecutive four-year term, coming out a 31-17 victor.

Coombs had gone into the race pointing to what he said was his many achievements from October 2010 to November 2015.

In a post-election address, Coombs said that he was confident that more gains would be made on those of the previous term as a result of his and the SVGFF’s relationship with overseas fraternal organisations, including UEFA — the governing body for Football in Europe.

“The close relationships that I have and we have with different international bodies like the U.S. Soccer Federation, will grow because we are offered scholarships, equipment and gear. In fact, we got the gear for the national (senior) team without paying (up front) and we are paying. And we got the greatest of concessions from them because of their links with Nike,” he pointed out.

“We have over two million dollars already approved (by FIFA) to buy a headquarters. We have 1.3 million dollars to get a home for football and we are going to access funds from FIFA to have a semi-professional league….we want to engage with the government with Lottery in the mix so we start to develop that sense of professionalisation with our players”.

Coombs told the Affiliates that the sport was in good hands as he highlighted the track record of the men on his executive, in first timers Otashie Springs, the 1st vice-president and 3rd vice-president Wayde Jackson along with 2nd vp Marvin Fraser, who was re-elected.

“Brother Otashie is from the Windward side. We want to develop football all across the country so I want to thank you all very much for voting a brilliant young educated, intelligent man. And the whole country is part of it, for we have Mr. Jackson from the Leeward side and everybody know the work that Mr. Jackson has been doing on the Leeward side working selflessly with the youths.”

After laying out the credentials of his vice-presidents, it was the turn of Mr. Coombs to train the focus on attention on himself — an art he has perfected like the consummate politician and one was schooled by the late grandmaster Ebenezar Theodore Joshua.

“Let me tell you Venold Coombs mean well. And will continue to be that person. Understand this I am no false prophet. You have people who I have identified me with administration over the years will come and tell you that in Venold Coombs you have a person who is dedicated and want football to go forward,” he said.

He said that it is his intention to listen to the ideas of everyone as he and his executive chart the way forward for the sport in St. Vincent and the Grenadines.

The president, who appeared to have had a turbulent relationship with some members of the last executive, indicated that the confidence shown in him and his slate by the Affiliates was a clear sign that he was on the right path in taking the game forward.

Third vice-president Elroy Boucher and Committee member Clemroy Francois both lost in their bid to be returned to the executive.

The remaining seven members of the executive — all committee members — will be named at a general meeting in the next two weeks, the president said.