Runway is ‘the easiest thing’ to finish at Argyle — Gonsalves 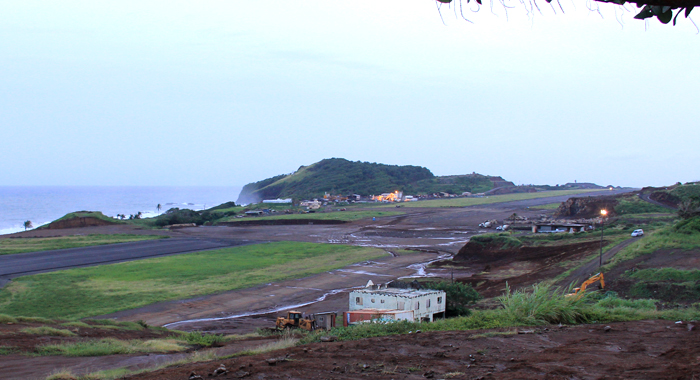 Argyle International Airport looking toward the unfinished section of the runway. (IWN photo)

The unfinished one-third of the runway at the long-delayed Argyle International Airport is the easiest part to complete of the work that remains undone, says Prime Minister Ralph Gonsalves.

“… the easiest thing to finish out there is the remainder of the runway. The easiest thing!” Gonsalves told a press conference of his Unity Labour Party on Monday, four days after he said 6,000 feet of the 9-000-foot runway have been paved.

“Paving a runway, once you have all the materials there, is not a lengthy process. Just like, not the same way, but paving a road, the more detailed work is the drains and the preparatory stuff on the road itself and the laying of the base and the various things; not actually putting on the different coats and the asphalt and so on,” Gonsalves said.

“The airport is not identical to that, but I am doing that by parallel reasoning for you. And I have to be careful lest somebody say I am equating both, because you have some people who are schooled in level 101 logic and don’t go beyond it.”

Gonsalves told a ceremony on Thursday after four small planes landed at the airport that “the airport, is, for all practical purposes, finished”.

The EC$729 million airport, which has been under construction for just over seven years, has missed completion deadlines annually since 2011.

Last week, head of the state-owned International Airport Development Company, Rudolph “Rudy” Matthias, said that the airport will need about two and a half months more to be completed.

Asked at the press conference on Monday when exactly the airport will be finished, Gonsalves said:

“Well, you heard Dr. Matthias saying by the end of the first quarter; by the end of March next year.  I said in the Parliament every time the IADC gives me a deadline I say well I accept what they are telling me as being reasonable.”

He, however, said critics haven’t taken into account that workers have had at least 100 days on which they could do no work.

Also, the government doesn’t always get the drawdown on money from loans and grants at the time when it is needed, said Gonsalves, who is also Minister of Finance.

“So, sometimes, you have to hold things in going without ramping up when your work plan says you should ramp up, because you don’t have all the money to do everything at the time.”

He said there are also operational reasons for the delaying, including the three years when no blasting could have been done in one area as the airport company waited for petroglyphs to be removed for preservation.

Meanwhile, the main opposition New Democratic Party which has repeatedly said that the airport will not be completed before 2020, clarified that prediction last week.

“Not if NDP wins,” party head, Leader of the Opposition Arnhim Eustace told a media briefing when asked about the 2020 timeline.

He said the airport will not be finished before 2020, “If it is going as current.

“When NDP wins, it will be different,” Eustace said.

General elections have been called for Dec. 9 and are expected to be a straight fight between Gonsalves’ Unity Labour Party and the NDP.

Eustace said that if elected, the NDP would approach the airport in quite a different manner.

“They will do so for a new administration,” he said at the press event where the NDP launched its election manifesto.

Asked about the NDP’s timeline for completing the airport if elected,

Eustace said: “We don’t have a timeline on that now, but we will work with them to come up with a programme.”

Meanwhile, West Kingstown MP, Daniel Cummings, the NDP’s spokesperson on infrastructure, said at the same press conference that Eustace’s projection was for 2020 if the ULP were to build it under the mechanism that they are using.

“The NDP says it will have a new focus after having looked at what is there and using completely different mechanism to hasten the completion of the airport, and to make sure that it’s properly operational,” Cummings said.