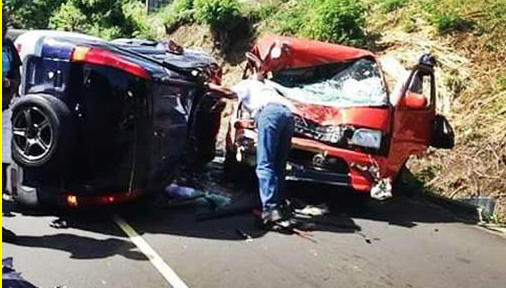 The scene in Ratho Mill immediately after the accident.

An investigation has been launched into a road accident that claimed the lives of two persons at Ratho Mill public road, approximately 10:45 a.m. Friday, police say.

Dead are Oswald De Freitas, a male resident of Park Hill, who is said to be in his 40s, and Jillian Nanton, a female in her 50s, also of the same address.

Preliminary investigations indicate that the accident involved three motor vehicles: PR413, a silver Nissan car owned and driven by Freddie Baynes of Park Hill; H1131, a red Toyota omnibus owned by Lenford Veira of Richmond Hill and driven by Joel Veira of the same address; and P7135, a blue Diahatsu jeep, owned and driven by Oswald De Freitas. The accident occurred in the vicinity of George Browne’s residence.

The omnibus was travelling towards the Windward section of the country and motor vehicles PR413 and P7135 were heading towards Calliaqua when the accident took place.

The driver and passengers of H1131 sustained injuries and were taken to the Milton Cato Memorial Hospital. Motor vehicle PR413 was slightly damaged.

A post-mortem examination will be carried out on the body of the deceased.

There have been 14 road accidents this year, which resulted in the deaths of 23 persons.