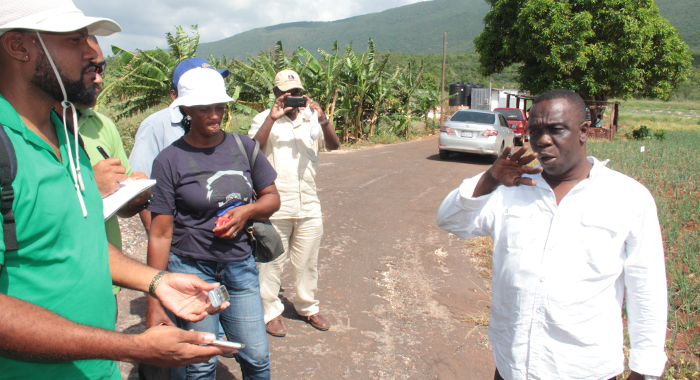 KINGSTON, Jamaica (CMC) — Sitting in the driver’s seat of her vehicle inside New Forest/Duff House Agro-Park in the south of Manchester, Carmeta Atkins easily fits the stereotypical description of a Caribbean farmer.

She wears a straw hat and long-sleeved clothing to protect her from the sun and the stains on her clothes is a giveaway clue to her occupation. Add “scientist” to Atkins’ résumé.

“I’m a retired microbiologist,” she says with seeming reticence in response to questions from a group of visiting farmers, agro-processors and other stakeholders in the agricultural sector and journalists from across the Caribbean and the Pacific.

“I love farming, from ever since I was a child. Now, I am retired so this is like a hobby and a business,” says Atkins, who owns a 1.5-acre farm in the 780-acre agro park.

Her biggest challenge is insects.

“I have markets all the time,” she says, adding that she grows papaya and had recently planted pumpkin and sorrel on the plot, where she has been farming for two years.

The Caribbean and Pacific Island visitors came to Jamaica as part of a learning journey that also took them to Trinidad and Tobago and St. Vincent and the Grenadines, where they observed agricultural practices and business models after the one-week Caribbean-Pacific Agro-Food forum held in Barbados earlier this month.

The visits, like the forum, were organised with support from the Netherlands-based Technical Centre for Agricultural and Rural Cooperation (CTA), a European Union agency whose work focuses on African, Caribbean and Pacific (ACP) countries.

“… an agro-park is a location with basic infrastructure to ensure that good agricultural practices are undertaken,” says Clarke, who manages the park.

He adds that the infrastructure at New Forest/Duff House Agro-Park includes roads, on-farm irrigation and packing facilities, and were financed by the Inter-American Development Bank. Farmers also enjoy access to ready market and financing.

“The drips are more effective. Sprinklers waste a lot of water,” Clarke tells the Caribbean Media Corporation (CMC), adding, “the drip puts the water exactly where it should be and capillary action spreads it out and we get efficiency, instead of wasting water”.

The Ministry of Agriculture and Fisheries here has overall responsibility for the agro-park, where farmers grow a wide range of crops, including scallion (green onion/spring onion), thyme, melon, tomatoes, cabbage, and Jamaican callaloo.

“… you will not see ten acres of anything. You will see two, one, half acre, because the farmers do their thing. The farmers live on the land and plant and we give them all the support they want so that they can be successful,” Clarke explains.

The farmers live inside the agro-park, and, to evaluate their success, one only needs to look at the houses in which they live.

At the agro-park, farmers are also experimenting with growing sweet potato. Sweet potato grown in Jamaica is in demand in Britain and the Beauregard variety has been introduced at the agro-park.

“What we are finding now is that the sweet potato we export is for the ethnic Jamaican market and that market is not growing anymore. We want to make some more money, so we are going into the cosmopolitan market. We are growing the Beauregard sweet potato with a view to accessing this market,” Clarke said, noting that when farmers grow their produce, they are guaranteed a market.

The markets include hotels, processing plants and higglers who go to the municipal market to sell.

“Right now, we are exploring the export market,” Clarke says, adding that all of the costs of production are met by the farmers.

“These farmers are not subsidised. What we do, we give them access to loans that they have to repay. The farms are run as a business,” says Clarke who does the cost of production evaluation for loan applications to the credit union.

If farmers are unable to pay the loans, the agro-park management works with them and the credit union to restructure the loans to make the instalments smaller and more manageable.

Individual farmers sign supply agreements with the processor, but that is being renegotiated so that the group signs, Clarke explains, adding that in this way, any legal action can be better dealt with as a group.

Alvin Findlay of St. Elizabeth praises the arrangement at the agro-park.

“The farming is nice. The water project is nice. I like it,” said Findlay, a 20-year veteran of farming who has been involved in the agro-park for about four years.

“I like this farm more because the water is here now,” says the father of two adult children, who are also involved in farming.

But the drought situation has often affected the outcome, says Findlay, who grows scallion and melon.

At the 1,400-acre Ebony Park Agro Park in Clarendon, manager Anthony Trout explains that potato farmers are not affected as much by praedial larceny.

“Potato doesn’t suffer the kind of loss that you night find with, for example, pepper or cabbage or something you can go and cut out,” he says, but notes that climate change does affect what farmers grow.

“So you have to change from what you are doing,” Trout tells CMC, adding that the agro-park is set up to absorb part of that change.

He says cabbage and lettuce are not crops traditionally planted in the agro-park.

“But when the dry season has affected the farmers in the hills who usually plant the cold crops, we have to take it down to where it is irrigated.”

The climatic condition also affects the markets as the demand remains unchanged and the supply falls.

“So it’s going to increase your price to a point where we have to import to stabilise that. So, the agro-park is supposed to be one of the means of helping to keep the prices stable,” Trout explains.

But it is not always a case where climate change results in a windfall for some farmers.

“You are not sure what you are going to be up against. You might find that you are spending more on pesticides. You might have to change your cropping pattern, your land preparation, which might add more cost to you,” Trout says.

“So, even though you might get a higher price in the market, you might not truly benefit from that because your cost of production went up too high.”

Prior to the visit to Jamaica, Vincentian farmer Gwendolyn Cottoy had demonstrated on her farm steps that are being taken to address the impact of climate change on agricultural production, and to improve dasheen yields.

It was her turn to draw inspiration from agricultural practices in another Caribbean country.

“I’ve learnt new ways of doing things, for example with the chive and the thyme. You can do chive and thyme on the same furrow,” she says, noting that a lot of irrigation is done in Jamaica.

“I have picked up a lot that I will look to see put in place in my country,” she says after visiting the agro-parks, adding that she would like to start to grow cassava in addition to her main crops: dasheen, sweet potato and pepper.

Alsi Tuqa, a programme officer with the Pacific Islands Private Sector Organisation (PIPSO) in Fiji also drew inspiration from the Jamaican agro-park models, where farmers are sometimes encouraged to plant smaller portions to get greater yields.

“Hearing the two speaking sessions today, I think we are on the right track with regards to clustering farmers, particularly those in agri-business and agri-tourism and just working with them in terms of developing business plans, how to approach financing with the financing institutions,” she tells CMC.

One reply on “FEATURE: Jamaica’s agro-parks, a success in agriculture”