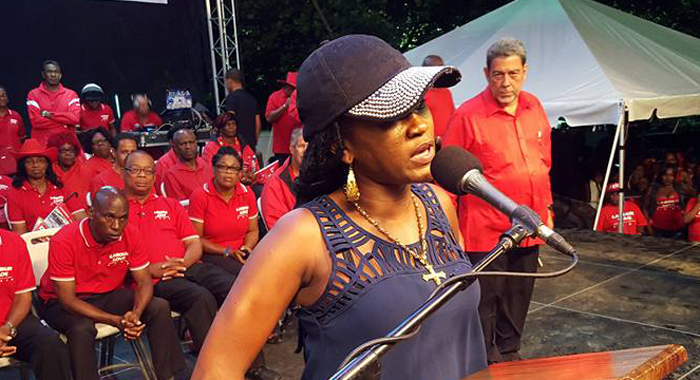 Prime Minister Dr. Ralph Gonsalves and other members of the ULP platform looks on as Fya Empress addresses the ULP rally on Saturday. (Photo: Lance Neverson/Facebook)

Vincentian performing artiste Lornette “Fya Empress” Nedd, who changed her mind about performing at the main opposition New Democratic Party’s (NDP) Youth Rally on Saturday, made a statement at the ruling Unity Labour Party’s rally at Calliaqua that same night after Prime Minister Ralph Gonsalves invited her to the event.

Gonsalves introduced Fya Empress at the event, saying that he was surprised to see her there.

But the artiste said in a statement on Tuesday that Gonsalves called and invited her to Calliaqua to hear “first-hand” from her what had transpired between she and the NDP.

During her appearance at the rally, Fya Empress, a former National Ragga and Calypso Monarch, denied that the ULP had victimised her family, forcing her to back out of her arrangement with the NDP, as the NDP claimed in a Facebook post earlier Saturday evening.

The post was made 24 hours after the artiste told the NDP of her change of mind.

The artiste issued a written statement on Tuesday saying, the “principled decision that I made appears to have been mis-reported and misinterpreted by certain quarters and I wish to clear the air”.

Fya Empress, a Vincentian based in Tobago, said that Vynnette Frederick — public relations officer of the NDP — contacted her on Nov. 23 on behalf of the NDP, asking whether she would be interested in appearing at a youth rally in St. Vincent on Nov. 28.

She said one Jamron Delpesche later contacted her, on behalf of the NDP.

She said airline ticket was sent to her via email, but Dougie De Freitas of Nice Radio and she travelled from Tobago to St. Vincent on Wednesday.

“Upon arrival to St. Vincent I was not met by any official responsible for organizing the Youth Rally nor by Mr. Defreitas. I was not in receipt of any per diem allowance either.

“I made contact with Jamron and I was advised of a rehearsal on Thursday, November 26th which I attended. I am a professional. Every single appearance I make involves a contract. Up to Friday, November 27th, no contract from the NDP was forthcoming although advertisements including reference to my scheduled appearance were being broadcast via radio and Internet,” Fya Empress said.

“Having a contract to perform at an event is very essential, especially at political events, as there are always songs that the Parties wish for one not to sing, especially any that may conflict with their message.

“I took a personal and principled decision not to perform and informed the NDP 24 hours before appearance time. I indicated my willingness to refund the Party for the airline ticket which cost approximately EC$1,300.00 and I did so on Monday, November 30th, the first working day after the Rally. I left St. Vincent in the evening of November 30th.

“What has transpired via electronic and social media, subsequent, has me in a state of shock and disappointment,” she said.

Fya Empress again denied that her withdrawal was due to victimisation.

“Let me state categorically, at no time have I, Lornette ‘Fya Empress’ Nedd, or any member of my family come under any pressure or threat of victimization by the ruling Unity Labour Party.

“Secondly, the NDP failed to provide me with a contract for my appearance so the reference to ‘one of the contracted performers’ is misleading.

“Third, when I arrived at the NDP Headquarters on Monday, November 30th to reimburse the NDP with about EC$1,300 for my air fare, I was greeted by a man who identified himself as the campaign manager, Mr. Friday, as well as by Mr. Defreitas who both uttered similar sentiments, ‘I have one question to ask you – what you come here for?’ I replied, ‘I came to refund my ticket.’ Their reply was, ‘Alright we have nothing to discuss.’

Does that strike you as representative or consistent with the report on News784 of ‘we stand in solidarity and sympathy with Fyah Empress?”

Explaining how she came to appear on the ULP’s platform after the developments with the NDP, Empress said:

“I also took a personal decision to respond to a call from Prime Minister Dr. Ralph Gonsalves, to come to Calliaqua where he was having a rally, to hear first-hand from me, what was really going on because he was made aware that my name was being scandalized via the electronic and social media, it would appear in large part, by the NDP.”

He said that the other person at the NDP headquarters when the artiste visited was not “Mr. Friday”, but the NDP’s campaign manager, Elmore Edwards.

De Freitas said that a ULP insider had intimated to an NDP official on Thursday that a senior member of the ULP had “reached out” to Fire Empress and that it was unlikely that she would appear at the NDP event.

He told I-Witness News that one does not have to have a signed document to be in a contract with someone.

Fya Empress booked the airline ticket, but he paid for it with his credit card, De Freitas said.

He said that when the artiste came to the NDP headquarters she was explaining that she did not know that her family supports the ULP when she agreed to perform for teh NDP.

De Freitas said that he told the artiste that there was no need to explain her decision.

He said the artiste wanted to refund the NDP in Trinidad and Tobago dollars for the ticket and he requested that she converts it to Eastern Caribbean Dollars, which she did.

De Freitas also questioned the artiste’s statements at the ULP event on Saturday that suggest that her decision as in the interest of her family.

He said that artiste’s family are known supporters of the ULP and she knew this when she appeared on the NDP’s platform in 2010, including singing a song endorsing the NDP.