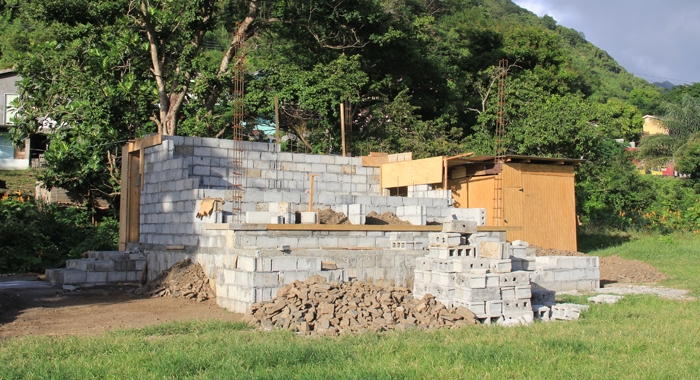 Observers say that the government is rushing to work on sporting facilities, such as this small structure being built at Buccament Bay Playing Field, in an effort to woo voters. (IWN photo)

Sportsmen and women will, once more, like many of their fellow citizens, be wooed with promises of better facilities and rewards in their efforts to eke out a living in their chosen field.

These promises, which in some cases just stop short of a of possibly a playing field in heaven, will come from many of the 43 candidates representing the four political parties contesting the 15 constituencies in Wednesday general elections.

The ruling Unity Labour Party (ULP) has once more, and, for the fourth successive elections, promised the construction of a modern stadium at Diamond Industrial Estate.

The party, which took the seat of governance on March 28, 2001, has returned in each of the elections following — 2005, 2010 and again in 2015 — rolling out the idea of a modern stadium. The idea and promise were put forward in glowing terms by successive sports ministers –Mike Browne, Clayton Burgin, Frederick Stephenson and Ces McKie — with Prime Minister Ralph Gonsalves leading the verbal cavalcade.

There were indications of some level of seriousness in the construction of the stadium, when Gonsalves, early in his administration, on a controversial trip to Libya, received a grant of US$1.5 Million towards the venture. Reports say a team of experts specialising in the putting down of tracks were invited to SVG and a ground-breaking ceremony — the second at the site — took place.

However, the promise of more funds never materialised following the unseating and subsequent death of then Libya leader Colonel Muammar Gaddafi. Many have argues that the administration was never truly committed to the project but only saw it as a vote garnering ploy.

This, notwithstanding, engineer Garth Saunders was made chairman of the “Stadium Committee”, which comprised personnel from the different sporting bodies. An office was set up in the Coreas Building and drawings were unveiled at a very elaborate session at the Peace Memorial Hall, attended by many from the sporting fraternity. The office was later moved to the Arnos Vale Sports Complex, with Browne pointing to this as a serious effort by the government to have the project completed in quick time.

It all went into a state of comatose with a few political palpitations over the years until McKie, an athlete in his time, was made Minister of Sports on 2012.

He, like his predecessors, latched onto the stadium idea with such gusto that the fallen hopes were once again transported to the summit of Mount Olympus. But some say it was more “fanatical intoxication” by the minister than reality, as the discussion, tamely petered out into thin air.

However, with the arrival of elections again, the mantra of “A modern stadium at Diamond” is once again in the air with the ruling party and McKie on message without missing a stride as they flirt with the desire of the electorate.

“We are going to build the new stadium at Diamond so we can have more Kineke Alexanders (SVG’s top female athlete) and produce world class athletes who could come like Usain Bolt and other Caribbean runners, because we have the talent here and this government cares about young people,” McKie said at a recent public meeting.

He went on to say how much the government has done to improve sports facilities across the country and would be doing much more once returned to office for a fourth term.

The main opposition New Democratic Party (NDP), in response, has pointed to the state of disrepair in which many of the country’s sports facilities have been allowed to fall, with many of the hard courts no longer lighted and the surface not suitable to host matches.

“It is a shame how they have allowed these hard courts and playing fields to come. It is a terrible that a government which says it cares about young people can preside over such decay,” the MP for South Leeward and candidate Nigel Stephenson said at a recent meeting at Questelles.

“We are going to light all the hard courts and playing fields so that our young people can get a chance to play and practice after work. We in the NDP genuinely care about sports and will put our money where our mouth is,” Stephenson a former youth cricketer and coach said.

He said that the NDP will construct a modern stadium and fix the many playing fields that the ULP have started at election time since 2005 but have failed to continue the work after that.

He, like Roland “Patel” Mathews, MP for North Leeward, has identified fields that were begun more than a decade ago but have remained untouched save for the “pre-Elections” exploratory foreplay.

But while the constituents of North Leeward and South Leeward have be put out to bleach, the Prime Minister’s constituency of North Central Windward has seen millions of dollars spent from the National Lotteries to put down new playing fields in Park Hill and South Rivers.

In the case of Park Hill, the government is said to have paid more than EC$1 million in securing lands that experts say were grossly over-valued. Questions have been raised as to why the government did not acquire the lands for a public purpose as was done with the lands of the Sylvesters for the Penniston Playing Field.

The constituents of East St. George have also received some attention from the ULP “Elections Sports Cavalcade” with work on the Calliaqua Playing Field, which reports say has left the alignment of the venue seriously flawed and unfit to host matches.

The government is said to have ignored the advice of persons qualified in that area and have made the field smaller and because of the current specification it, therefore, can no longer accommodate football matches, according to one person who deals with the laying out of playing fields.

The two major parties, the ULP and NDP, have both laid out their plans for sport in their “Campaign bibles”, their manifestos, hoping that the sports fraternity will look favourably in their direction.

It appears, based on the feedback, that the lighting of hard courts and playing fields will give a boost to sport in the immediacy, with the long awaited modern stadium eagerly looked forward to by young athletes as they strive to be able to compete on a level playing field with their peers from around the region.

The sports fraternity, like all other citizens, will get out their blocks on Wednesday to take part in General Elections with a view to passing the baton to future generations.