Four in a row for ULP 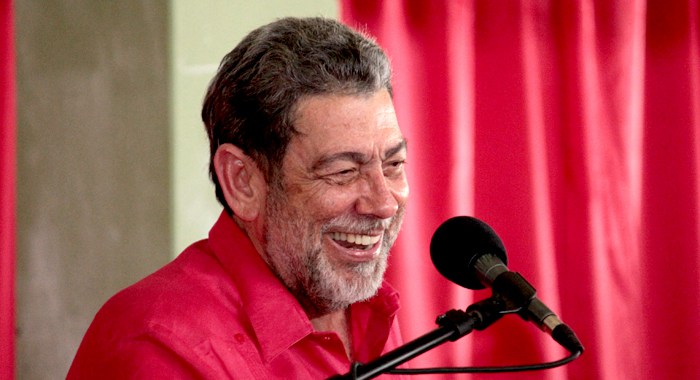 Vincentians on Wednesday re-elected the Unity Labour Party (ULP) for a historic fourth consecutive term in office for a Labour government in St. Vincent and the Grenadines (SVG), in elections that may have also sealed the fate of leader of the main opposition New Democratic Party (NDP), Arnhim Eustace.

The ULP retained the same 8 seats it held in the last Parliament, while the NDP held on to the remaining 7 seats, though by reduced margins.

The 3-year-old Democratic Republican Party and the decade-old SVG Green Party failed to capture any of the 15 seats at stake.

“Today, the people of St. Vincent & the Grenadines embraced the politics of love. They embraced our progressive agenda for the future by returning us to government. We are calling for a recount in North Leeward and South Leeward,” the party said in a statement on its campaign website.

“I am humbled and honoured that the people of St. Vincent & the Grenadines embraced our bold vision for the future and rejected the politics of hate.

“We are looking into various issues in North Leeward and South Leeward and we are also calling for an immediate recount to ensure that ALL the votes are counted in those constituencies. There are more rejected ballots than the margin and those ballots should examined closely to determine the intent of the voters,” party said.

Preliminary results are that the NDP retained the North Leeward seat by seven votes and South Leeward by 119 votes, according to figures published on the government’s website Wednesday night.

“We ask Vincentians to celebrate this victory in peace and maturity. Now is the time to come together as one nation to address our developmental challenges and move forward to uplift our nation and it’s people,” the ULP said.

But even before the results were announced, broadcaster Douglas DeFreitas, the logistics manager for the NDP’s campaign, used Nice Radio, a pro-NDP radio station that he manages to call on party supporters and former police officers sympathetic to the NDP to travel to the Central Leeward town to guard ballot boxes amidst what he said was an extremely close contest between the ULP and the NDP.

Electoral officials have called Central Leeward for the ULP, saying it secured 2,496 votes, compared to 2,182 for the NDP.

The successful ULP candidates are:

The successful NDP candidates are:

The preliminary results announced Wednesday night show that Matthews was re-elected as MP for North Leeward by a mere seven votes, and a recount is expected on Thursday.

He faced a stiff challenge from lawyer and first-time candidate, Carlos James, who was dogged by some controversies during the campaign.

James threatened to sue Matthews during the election campaign after the incumbent MP said at an NDP campaign rally that James is a “criminal”, a reference to a fine James had paid more than a decade ago after an incident also involving a police office.

James’s criminal record has been expunged in keeping with a law passed more than five years.

The political novice was also the subject of some discussion after he said at a ULP campaign event that rich Vincentians in some areas of the country were against the ULP helping poor persons.

And, more recently, James discharged his licenced firearm, to quell a bottle-throwing incident between ULP and NDP supporters in Petit Bordel, near to a shop that Matthews owns.

The younger Gonsalves (3,124 votes) won the East St. George seat, defeating NDP chairman, Linton Lewis (2,521), a senator in the last Parliament, who failed to win the seat on his third attempt.

Wednesday’s loss brings to four the number of defeats that Lewis has suffered in elections in SVG, including one attempt in West St. George.

Former head of the state-owned Agency for Public Information, communications specialist, St. Clair “Jimmy” Prince (2,639), also a first-time candidate, retained Marriaqua for the ULP, which has held the seat since 1998.

Prince defeated pharmacist Curtis Bowman (1,881) of the NDP, who was making his second attempt to win the seat, and Green Party candidate Adella Samuel (7).

The ULP retained the Central Leeward seat, from which it retired incumbent MP, Maxwell Charles who was minister of national Reconciliation in the last Cabinet, and called out of retirement former deputy prime minister, Louis Straker (2,496), amidst what was pitched as a formidable challenge by first-time candidate, Ben Exeter (2,182).

Straker, a former minister of foreign affairs, and transport and works, represented Central Leeward from 1998 to 2010, when he retired from politics, before returning to politics again this year.

Political scientist Peter Wickham, who was a member of the panel announcing and analysing the results Wednesday night, said that the vote may have been a referendum on the opposition rather than the ULP.

He said that the results suggest that people are ready for change, but are not satisfied with the main opposition party and may have voted for the smaller parties instead.

While Eustace retained his East Kingstown seat which he has held since 1998, he saw his margin of victory slide from 467 votes in 2010 to 145 in Wednesday’s election.

Eustace amassed 2,443 votes to 2,298 attracted by Luke Browne, who is making his second bid to win the seat, which Eustace has been representing since 1998.

Political observers say that the NDP will be left with no choice but to selected someone to replace the 70-year-old leader, who has failed four times to lead the party to victory, if it is to continue to be a worthwhile political force in the country.

Analysts further say that the victory is an indication of Eustace’s failure to convince the electorate, after substantial attempts in 2005 and 2010 (when the NDP gained 4 additional seats), that the ULP administration has mismanaged the affairs of the country, most notably the economy.

They also say that the ULP has been able to convince the electorate, amidst substantial calls for change, that the ULP administration it in fact the change.

The ULP was able to woo voters in the face of a poll it commissioned ahead of the 2010 general elections that found that 58 per cent of respondents said the “issues of greatest concern” to them this election were jobs/employment, the cost of living and the economy.

The victory suggested that the NDP failed to convince voters that the ULP has created a dependency culture aimed at keeping poor Vincentians loyal to the ULP by giving them hand-outs that do not improve their circumstances in the long run.

In advancing its case in this regard, the NDP had noted that having 6,000 persons — almost 10 per cent of the population on Public Assistance — was nothing to brag about, as Gonsalves appeared to do during one of his campaign speeches.

Supporters of both political parties took to the streets across the nation in celebration of their national and regional victories.