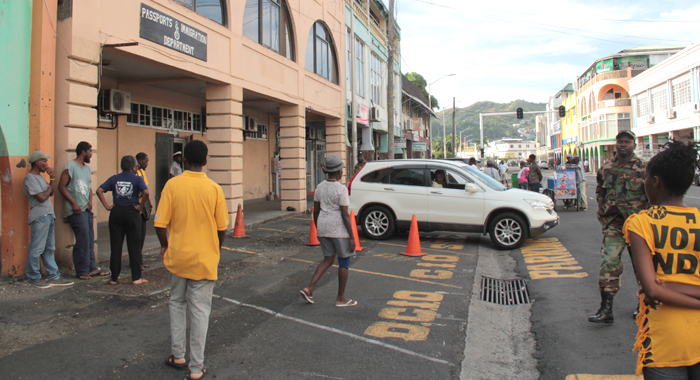 NDP supporters outside the Electoral Office in Kingstown on Sunday. (IWN photo)

Supervisor of Elections Sylvia Findlay says she will issue a statement about developments at the Electoral Office on Sunday that triggered some demonstration by supporters of the New Democratic Party (NDP).

I-Witness News contacted the elections chief Sunday evening, some hours after she and the returning officer for Central Leeward, Winston Games, left her office building in Kingstown after being inside for some hours under police guard.

Central Leeward is in the spotlight after Wednesday’s general elections, which election officials say was won by the incumbent Unity Labour Party (ULP).

Officials say that the ULP won eight of the 15 seats, with the remaining seven going to the NDP — a repeat of the 2010 results.

But the NDP is claiming that it won the Central Leeward seat, and party leader Arnhim Eustace told the media and party supporters on Saturday that the NDP will be taking legal action, beginning today (Monday).

The NDP supporters and activists who gathered outside the Electoral Office in Kingstown on Sunday took videos of person entering and leaving the office.

In a video obtained by I-Witness News, activists films Gaymes leaving the office and ask what they were doing inside on a Sunday.

Nick Francis, president of The Young Democrats, the youth arm of the NDP, was at the scene in Kingstown when I-Witness News visited on Sunday.

Francis spoke to I-Witness News “as a concerned citizen of St. Vincent and the Grenadines”.

He said he was on his way home from work when he saw some Young Democrats outside the Electoral Office, so he stopped and inquired about what was happening.

“And I was being told that the Returning Officer for Central Leeward, Mr. Winston Gaymes, and the Supervisor of Elections were apparently in the building and the entrance of the building was being guarded by two police officer who were armed.”

Francis said that the group stuck around and saw Gaymes leaving the building through the entrance and went to his vehicle.

“And some of our Young Demz took pictures of him. We also inquired of Miss Findlay-Scrubb what was their business doing here. In fact, Miss Findlay-Scrubb asked us to come to her and ask her what they were doing here and what business was taking place in the building. But she subsequently went back inside the building after we came closer to her to find out what was going on, with our video camera.”

Francis said that four officers from the Special Services Unit, a tactical squad of the Police Force, joined the other police officer, and the police chief, Michael Charles, came by and tried to move them from the roadside.

“So, the question is, we want to know and I think Vincentians would be most interested to find out what purpose the Returning Officer for Central Leeward and the Supervisor of Elections were doing at the Electoral Office on a Sunday afternoon that could not wait until an ordinary business day on Monday morning,” Francis told I-Witness News.

“And the people just need to find out what’s going on and I think there is no harm in us, as citizens, concerned citizens, asking the question what purpose they would have being in the Electoral Office just after the election with all the controversy that is taking place about the results of the election and what has taken place in Central Leeward. I think inquiring minds need to know.”

The election chief was heckled by the some members of the small crowd as she left the building under police guard sometime later. (See IWN video below)