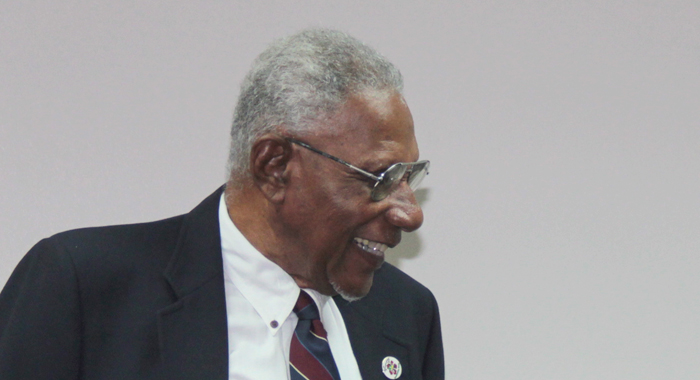 Octogenarian public sector worker Sir Vincent Beache has decided to give up his lucrative government contract at the end of this year, Prime Minister Ralph Gonsalves announced Monday during the swearing-in of the new Cabinet.

Gonsalves said that Sir Vincent has served the nation “faithfully and well” for over 40 years in public life, but has “offered to demit his post as consultant and advisor to the Minister of National Security by the end of this year.

“I thank him for his outstanding service,” Gonsalves said of the Former Minister of National Security who exited politics ahead of the 2005 election, after one term in government.

Gonsalves said that Sir Vincent, along with the Permanent Secretary in the Ministry of National Security, has had basic oversight of the day-to-day operations of the ministry over the past 10 years.

He said that Sir Vincent and the Permanent secretary have also offered him policy advice.

Gonsalves’ Unity Labour Party (ULP) administration has come under repeated criticism for it employment of the pensioner.

Opposition politician St. Clair Leacock, who is MP for Central Kingstown, in September described as “corruption” the ULP government’s appointment of Beache as a director of multiple government businesses and agencies.

He said Beache was in charge of giving gun license, advising the Commissioner of Police, on was a director of PetroCaribe, PDVSA SVG, East Caribbean Group of Companies, VINLEC, the Cadet Force and the Housing and Land Development Corporation.

“In fact, … and I hope the journalists take note of this: on the corrupt practice there alone, where a sitting prime minister takes an 84-year-old person and puts him on eight boards at the expense of the youth of the nation, he should be dismissed for all times from governance in any country,” Leacock said.

Gonsalves said Monday that he was discussing as Beache’s possible replacement “a young man with tremendous experience in the field of national security, intelligence and white-collar crimes”.

I-Witness News was told and reported in January that head of the Financial Intelligence Unit, Grenville Williams was promised the post of security advisor if he dropped out of the race to represent the ULP in South Leeward and nominate then senator, Jomo Thomas as the candidate.

Thomas, who emerged as the candidate, lost to the New Democratic Party’s Nigel “Nature” Stephenson — who retained his seat.

Thomas has been fingered to become Speaker of the House of Assembly.

Gonsalves told Monday’s ceremony that he is “in quest of transitioning to a new generation of leaders.

“I promise you that in the campaign and I have to carry out that promise in government because I don’t want when 2020 comes around that you are lining up at my office or my residence to say, ‘Comrade you have to do another run.’ Because if you come and do that, it is not going to be ‘Ask Ralph’, I am going to say to you, ‘Ask Eloise’,” he said, referring to his wife.

Gonsalves said that in January the Cabinet will appoint the boards of directors of the various statutory entities and other public enterprises.

He said there will also be changes in personnel at the country’s missions overseas.

“The process of renewal must be embarked upon with the necessary and desirable focus and urgency. After all, why have we had the education revolution if not to find spaces for some of the younger men and women who have come through the system and whom we know are of quality? We have to provide that.”

Gonsalves said this does not mean that his government is forgetting experience.

“But we have to have a proper blend, and we have to ensure that we open it up for younger persons of talent.”