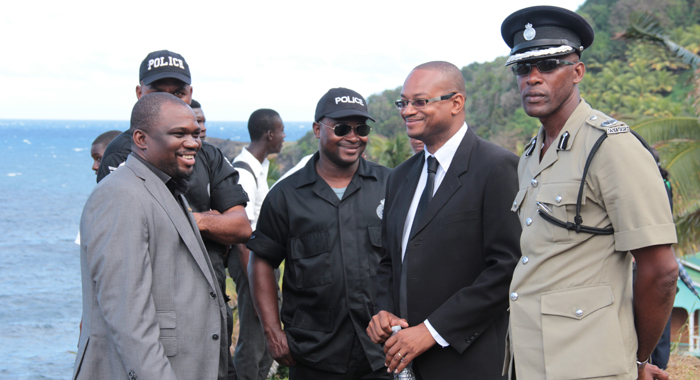 Director of the FIU, Grenville Williams, second right, chat with police officers on the sidelines of a funeral in Fancy on Sunday. (IWN photo)

“That’s a question I’ve been asked over the last few days, and what I can say, as far as I am aware, I remain at the FIU in the immediate future. That’s all I can say on the matter,” Williams told I-Witness News on Tuesday.

Well-placed sources have told I-Witness News that Williams, who failed to become the Unity Labour Party’s (ULP) candidate for South Leeward in the next general elections, has been identified for the post as National Security Advisor.

Sources say that Williams was promised “something better” amidst efforts to persuade him to opt out of the South Leeward race, which Jomo Thomas won.

Williams nominated Thomas, a lawyer and ULP senator, as the candidate when the ULP held its South Leeward constituency conference last year. The FIU head, however, did not stand nor congratulate Thomas as other delegates did after Thomas’ nomination was finalised. Sources close to Williams said he was pressured into making the nomination, but Williams has declined to comment on this.

Asked if he is in any discussion regarding a move to another position within the Ministry of National Security, Williams told I-Witness News, “That’s something I’d prefer not to address at this time.”

Williams told I-Witness News that his contract as head of the FIU expires in November 2016.

Sources say that if Williams become National Security Advisor, a female lawyer close to the ULP may replace him at the FIU.

One reply on “Will Grenville Williams become National Security Advisor?”