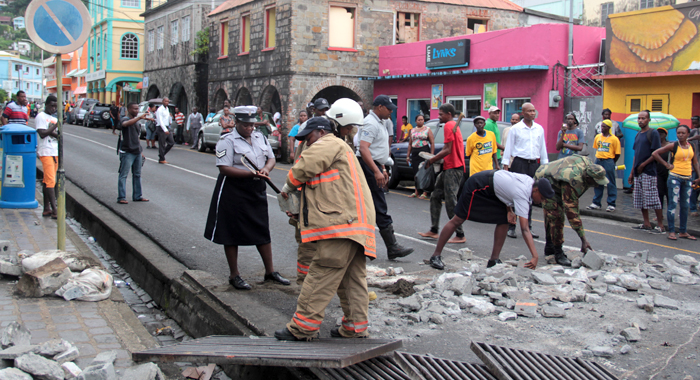 Police officers and fire fighters remove debris dumped in the street of Kingstown by NDP protesters on Monday. (IWN photo)

Prime Minister Ralph Gonsalves on Monday called on the main opposition to cease their street protest over the results of last Wednesday’ general election.

Gonsalves’ Unity Labour Party (ULP) was declared winners of the votes by eight seats to the NDP’s seven.

But the NDP is claiming that it won the Central Leeward constituency and is the legitimate government.

The Cabinet was sworn in at Heritage Square Monday evening, several hundred feet away from where the NDP staged an all-day protest.

The largely peaceful agitation included the dumping of construction debris and metal grills from the sidewalk onto Halifax Street, which disrupted the flow of traffic temporarily.

Gonsalves, speaking at the swearing-in ceremony, said that the ULP won eight of the 15 seats with majorities ranging from “comfortable to overwhelming”

“That is a fact,” he told the gathering, which including persons dressed in ULP campaign t-shirts.

He noted that in terms of popular vote, the ULP more than doubled its victory margin compared to the 2010 general elections.

“The ULP today, on the basis of free and fair elections is in a stronger political position than in 2001. That is also a fact.”

Gonsalves said that the NDP leadership is “entirely delusional” in thinking that they won the elections.

He said the CARICOM, Commonwealth and OAS election observer missions have already issued their preliminary statements “confirming that the elections were free and fair and reflected the will of the people.

“The NDP, through its delusional political lens, insist, against all the evidence and right reason, that it won — a political strategy based on a fiction, nay, a monumental falsehood that is bound to fail in any modern, sophisticated, information-driven society like St. Vincent and the Grenadines.”

Gonsalves urged the NDP “to cease their futile attempt to destabilise the country politically”, adding,

“They going attempt but they can’t succeed.

“And I am urging them to abandon the cockeyed view that a loss is a win and that a minority of seats and a minority of votes empower their party in a democratic society to run the country instead of the ULP, which won the majority.”

Gonsalves said that even if the NDP considers, “erroneously,” that it has a case to be answered, the proper place to seek that answer authoritatively is in the court of law.

“This lawless charade upon which they have embarked on the street will be strongly resisted by this democratically elected government. This is a matter of high principle for us. Let no one doubt the resolve of the government and the prime minister on this matter.”

The Dec. 9 results were the fourth consecutive one with Arnhim Eustace at the helm of the NDP, although he retained his seat as MP for East Kingstown for a fifth consecutive term.

“I fully appreciate that Mr. Arnhim Eustace and some of his leadership are at the end of their political careers. Their recent defeat hastens the termination of these careers.

“Twenty consecutive years in opposition brings pain and anguish. But these human feelings and emotions must not prompt any responsible leader to permit those feelings or emotions, personal vainglory and a loss of opportunity to sacrifice the national good on the altar of that which is unworthy. A loss of face ought not to trap one into a loss of good sense,” Gonsalves said, adding that apt insight is provided by Psalm 37:14-15: The wicked draw the sword and bend the bow … But their swords will pierce their own hearts, and their bows will be broken.”

He said the same psalm teaches in verse 23 that if the Lord delights in a man’s way he makes his steps firm.

“Though he may stumble, he will not fall, for the Lord upholds him with his hand,” Gonsalves said, quoting verse 24.

“I know that my heavenly father is upholding me with his hand,” Gonsalves said.

NDP president Arnhim Eustace told I-Witness News on Monday that his major concern was getting all the requirements for the legal work done as quickly as possible as the NDP prepares to go to court over the election results.

“We are submitting documents today and we have to submit documents in a day or two again, because we are not dealing with one constituency, we are dealing with several constituencies, but, of course, the most urgent is Central Leeward.”

The NDP is claiming that there are major irregularities in Central Leeward that could result in the NDP being declared the winner or could force a by-election.

I-Witness News has seen photograph purporting to show ballots with parts missing, which the NDP’s legal team will argue should not be counted as acceptable ballots. Sources say that there are over 300 ballots of this nature in Central Leeward.

The NDP is also arguing that ballot boxes were unsealed, a claim that Supervisor of Election, Sylvia Findlay denied in a statement on Monday, saying, “All boxes were properly sealed with both the plastic and paper seals in place.”

8 replies on “PM accuses NDP of trying to ‘destabilise’ SVG”