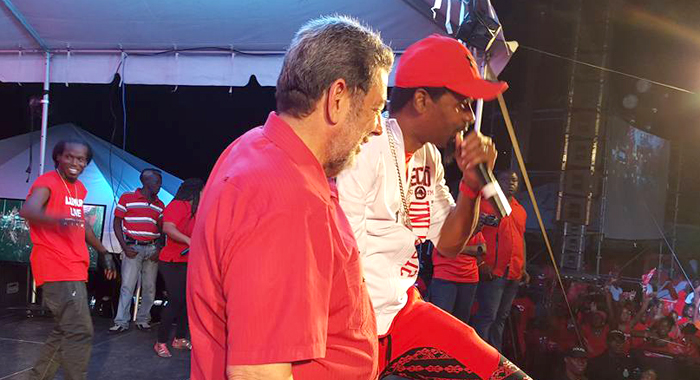 Prime Minister Ralph Gonsalves’ call at the swearing in of the new Cabinet on Monday for “one love” to replace “Labour love” did not stand for very long.

“Labour Love” was a campaign slogan for Gonsalves’ Unity Labour Party (ULP) during the campaign for last Wednesday’s general election, which the ULP won for a fourth consecutive term in office.

Speaking at the swearing-in of the Cabinet in Kingstown on Monday, where a number of persons turned up in their ULP campaign t-shirts, Gonsalves said:

“I know that we have our Labour love t-shirts. But after the elections we have to think because since the country belongs to all of us, Labour Love necessarily must metamorphose, must evolve into one love. And any time anyone comes to you with anything, say one love. And I mean that sincerely.”

But, shortly after Gonsalves’ call, which came at the end of his speech, soca artiste Luta, who the MC said would come to sing some Christmas songs, went back into campaign mode, singing mainly ULP campaign songs.

The artiste’s choice of songs at the event left some persons wondering out loud if he had not heard the Prime Minister’s admonition or if the nation’s leader’s was just being politically correct in his utterances.