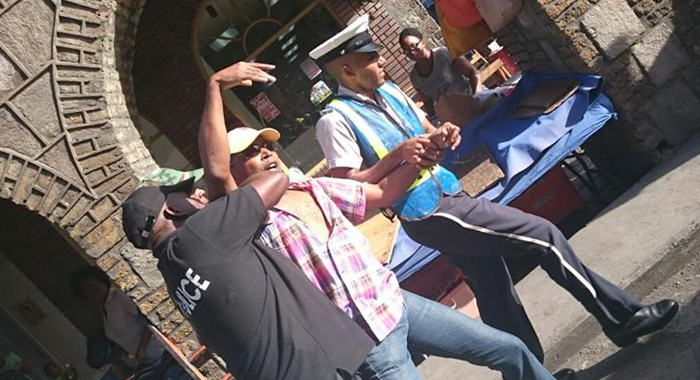 Ben Exeter, the main opposition New Democratic Party’s (NDP) candidate for Central Leeward in the Dec. 9 general election was up to 7 p.m. Tuesday in police custody and yet to receive medical attention for injuries he is said to have sustained when he was beaten by police during his arrest in the streets outside of the Parliament building almost three hours earlier.

Shabazaah GunMunro George, a member of the Young Democrats, the youth arm of the NDP, was also arrested.

NDP leader Arnhim Eustace said the police did not say why Exeter, who was the NDP’s candidate in Central Leeward in the Dec. 9 election, was taken into police custody.

“The police have not said anything about why he was taken into custody. They just admit that they have him. I’ve been able to speak to him … and he complains of certain injuries and you can see the whelps from those injuries.”

However, a source close to the NDP told I-Witness News that Exeter was reportedly arrested after police officers realised that he had a firearm on his person.

He was at the time among persons gathered in the street outside the Parliament building, where the ceremonial opening of the 10th Parliament was about to take place.

The source said that Exeter explained to the police officers that he is the holder of a licensed firearm and was in the process of showing the officer his firearm licensed when he was hauled away to the Central Police Station, located nearby.

The video below, posted on the NDP’s Facebook page, shows a struggle between Exeter and police officers before he was hauled away to Police Headquarters.

The laws of St. Vincent and the Grenadines say that holders of licensed firearms must have the firearm and their permit on their person at all times, a senior police officer told I-Witness News late Tuesday

Eustace, addressing party supporters and other persons gathered outside the Central Police Station, said sometime after 6 p.m. that Exeter had not been changed with any offence.

“He is there with the lawyer trying to get a determination of what he is going to be charged with. We don’t know yet,” Eustace said, using a police megaphone.

Eustace said that Exeter has some bruises on his face, adding, “It is important that he gets medical attention.

“That is our view and we want him to go and get the medical attention, accompanied by somebody from our side and somebody from the law enforcement because we are going to need that information ourselves if anything happens later on.”

He said NDP officials will remain at the Central Police station and await Exeter’s return from the hospital, adding that a medical examination should take about 40 minutes.

The laws of SVG say that an injured person who is in police custody must be allowed to see a physician of his/her choice as soon as possible.

Eustace said that three lawyers have seen Exeter and they agree that he needs to seek medical attention.

“As a matter of fact, one of the lawyers is also going down with him when he goes to seek medical attention.”

Reports are that Exeter was struck by a police officer.

Asked if Exeter had reported this to him, Eustace told reporters: “He said he was struck by a police officer.”

But as the NDP leader was answering the question, Assistant Superintendent of Police Timothy Hazelwood, who was standing next to Eustace, took away the police megaphone, saying it is for Eustace to address the crowd and that the politician can respond to questions from the media directly.

But as the persons protested the police officer’s decision and amidst comments by Eustace that the crowd could not hear him, Hazelwood returned the microphone of the megaphone to Eustace, but pointed the speaker end into the air, making it difficult for the gathering to hear what Eustace was saying. (see video below)

Some persons at the protest contrasted the reaction of the police to Exeter’s possession of the firearm to their response to an incident in Petit Bordel, where ULP candidate for North Leeward, Carlos James, discharged his licensed firearm during a bottle-throwing incident involving ULP and NDP supporters a few weeks ago

Exeter was among persons gathered outside the Parliament building where the NDP protested as the ceremonial opening of the 10th Parliament took place.

But the NDP, which officials say won the remaining seven seats, is claiming victory in Central Leeward and, by extension, the government.

A High Court judge on Tuesday denied an application by Exeter to access certain electoral documents related to the Dec. 9 poll.