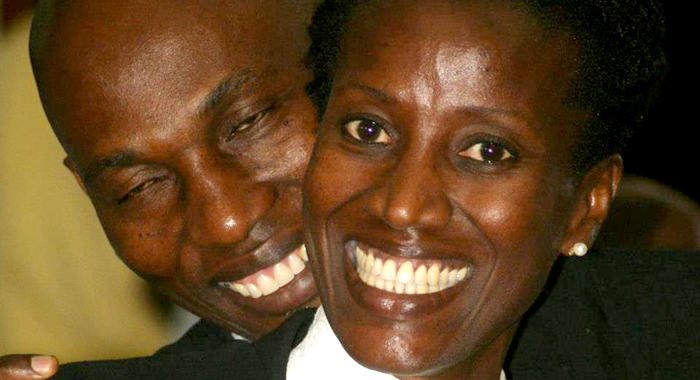 New Democratic Party (NDP) president Arnhim Eustace is said to have been pressured on Monday to nominate a woman among the two opposition senators to be sworn into Parliament later today (Tuesday).

Thomas, the ruling Unity Labour Party’s (ULP) candidate for South Leeward in the Dec. 9 general elections, will be nominated as Speaker of the House of Assembly when the new Parliament opens today, Prime Minister Ralph Gonsalves has announced.

Thomas and Barnwell were in an intimate relationship, which I-Witness News understands ended in the months leading up to the Dec. 9 general elections, in which Jomo failed to unseat the NDP’s Nigel “Nature” Stephenson, who was elected to a second term in office.

Barnwell, work as a lawyer for the NDP during the election campaign, including during the final count in Central Leeward, which electoral officials have declared for the ULP, but the NDP is claiming victory in that seat.

I-Witness News was reliably informed that Eustace had initially chosen as senators first-time candidates businessman and university lecturer Dr. Julian “Jules” Ferdinand and agriculturalist Lauron “Sheara” Baptiste, both of whom entered politics about four years ago.

Our sources say that Eustace replaced Baptiste with Barnwell, although some party insiders have argued that Baptiste should have been appointed a senator almost four years ago, when he was first confirmed as a candidate.

They say that he should have replaced NDP spokesperson, gaffe-prone lawyer Vynnette Frederick in the senate.

Frederick failed in her bid in 2010 to prevent fellow first-time candidate Cecil “Ces” McKie of the ULP from continuing the ULP representation of West St. George in Parliament.

Eustace’s decision to keep in the senate Frederick, who is also embroiled in a perjury case, even amidst her admission that she had no interest in running again has left some party supporters bewildered.

Others have, however, said that it was important for her to bring a woman’s perspective.

Observers say that the NDP was wary of having a full slate of men in Parliament, even after it announced an all-male slate of candidate for the general elections, and, therefore, kept Frederick in the senate.

Ferdinand, a former CEO of the Eastern Caribbean Group of Companies (ECGC), also failed to unseat Cecil “Ces” McKie in the Dec. 9 poll.

Anesia Baptiste, founder and Leader of the Democratic Republic Party and a former NDP senator who was fired in 2012, amassed 45 votes in the constituency.

Baptiste had credited herself for the resurgence of the NDP after it convinced electors to reject proposed changes to the Constitution in 2009 and went on to gain four additional seats in the 2010 general elections.

However, she failed to repeat that feat for her own party, which saw each of its six candidates losing their deposits.

The NDP’s Baptiste failed in his bid to unseat Montgomery Daniel, who has been representing North Windward since 2001.

The DRP’s candidate, George Byron   got 15 votes, while the Green Party’s Christian Waldron got 5 votes.

NDP chairman, Dr. Linton Lewis replaced Ms Baptiste in the senate, but he failed to win the East St. George seat against first-time candidate Camillo Gonsalves, bringing to four the number of times that Lewis lost in the St. Georges constituencies.

The opposition senators will join ULP senators Julian Francis, who has been appointed to the senator for a fourth consecutive term and again given leadership of the Ministry of Transport and Work, Urban Development and Local Government.

Luke Browne, who lost against NDP leader Arnhim Eustace for a second consecutive time, has been appointed Minister of Health, Wellness and the Environment.

Deborah Charles, a first-time candidate who failed to unseat the NDP’s Daniel Cummings in West Kingstown, has been appointed Parliamentary Secretary in the Ministry of Education, Ecclesiastical Affairs, and National Reconciliation.

Carlos James will be nominated as Deputy Speaker of the House of Assembly at the ceremonial opening, which begins at 4 p.m. today.