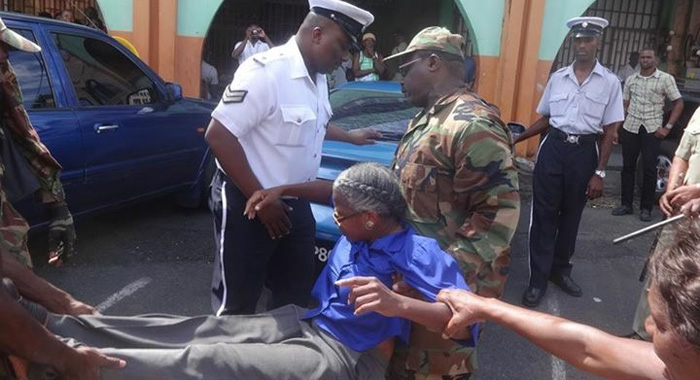 Washington-based Vincentian political activist Luzette King is scheduled to appear in court in Kingstown on Thursday to answer a charge of inconveniencing the public.

The charge stems from an incident during a protest in Kingstown on Wednesday, during which police attempted to physically remove protesters from in front of the Electoral Office.

Photos and videos by media professionals and members of the public show male police officers lifting the female activist. In one of the photos, her blouse is displaced, exposing the cups of her brassiere.

King, who also hosts a programme on a local radio station, was arrested at the picket line in Kingstown, where supporters of the main opposition New Democratic Party (NDP) continued to protest the results of the Dec. 9 general elections, which the NDP says was stolen by the ruling Unity Labour Party (ULP).

The ULP was returned to a fourth consecutive term, having won 8 seats, compared to the NDP’s 7 — a repeat of the 2010 election results.

King was charged that on Jan. 6 at Bay Street, Kingstown, she “did cause inconvenience to the public in the exercise of common rights, to wit, by sitting in the public road, hindering the free flow of traffic”.

King was released on station bail after 4 p.m. Wednesday.

She told iWitness News that she was in a bank nearby when someone told her to come to the picket line quickly.

“And I came over and I saw about three superintendents of police and a whole squad. And they were telling us that we couldn’t demonstrate in front of the bars (barricades), which we have been doing for weeks,” King told iWitness News.

“So we were there and we didn’t find that we were doing anything. But what happened, G7 had passed not long before and we jeered G7 and the police came within half an hour. So we think — I believe — it was in response to that,” King said.

King said that the police began pushing the protesters and one struck her in the side.

She said that as the police were pushing them, she thought, “No! You are not pushing me out of the way where I know I should be demonstrating. So I sat down. So, I sat here for a while and next thing I know, they started bringing cars to block us from in here. And I wouldn’t move. And because I wouldn’t move, they lifted me up and threw me in the transport.”

King said she did not want to comment too much on the charge against here.

“Our demonstration is because we believe that the election was stolen. We have ample evidence that this election was not free and fair and we’ve been here since election.

“I’ve been here Christmas Day; I’ve been here New Year’s Day, but, interestingly, a man passed me there and asked me if I was Luzette King, and I said, ‘Yes.’

“He said to me, ‘You have something coming to you; you going get it. Be careful.’ … And this is what I get today,” she told iWitness News.

“I ain’t going nowhere. We want a free and fair election — at any cost. So this is nothing. Being an inconvenience is nothing to the inconvenience of five years politicians abusing us, using our money, we don’t how it go. This is nothing, because I going be here again,” said King, who is a former member of the ULP.

“I’m going to court nine o’clock tomorrow and when ah done, I coming back here,” she told iWitness News.

Deputy Commissioner of Police Reynold Hadaway, who was in front of the Electoral Office late Wednesday, declined to comment on the development.

He, along with some senior and rank and file members of the Police Force remained in front of the Electoral Office until the last protesters left shortly before 6 p.m.

iWitness News understands that the police were acting on an oft-ignored law that says any demonstration must take place 200 yard away from public buildings.

King became the third personality associated with the NDP to be arrested and charged in just over a week.

Exeter pleaded not guilty to the charges and is scheduled to reappear in court for trial on Jan. 25.

Shabazaah GunMunro George, an NDP activist in his late teen, was also arrested at the same time as Exeter and charged with obstruct Cuthbert Morris in due execution of his duty and being in possession an offensive weapon, to wit, a zapper.

George is also scheduled to reappear in court for trial on Jan. 25.