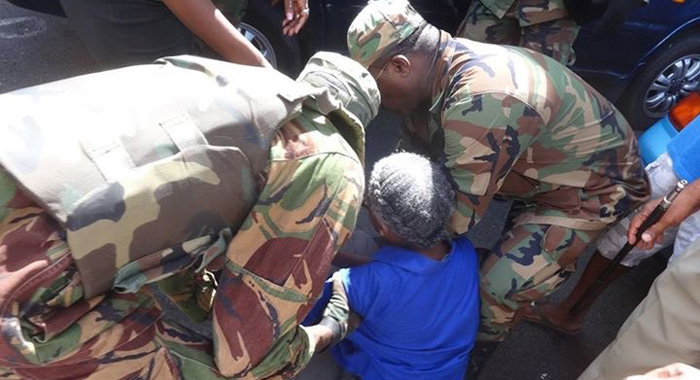 The main opposition New Democratic Party (NDP) is questioning the claim by Prime Minister Ralph Gonsalves that someone spray-painted the letters “NDP” onto the outer wall of the electoral office in Kingstown Tuesday night.

Gonsalves said the alleged occurrence and harassment of the elections chief resulted in police deciding to enforce on Wednesday a law about public meetings.

He told the media on Thursday that Supervisor of Election Sylvia Findlay was “assaulted, threatened and intimidated by a person or persons who came off the protest line” as she was leaving her office on Tuesday.

The Prime Minister further said he was advised that one of the protesters sprayed the letters “NDP” on the external wall of the Electoral Office.

“Now, if there is that occurrence, the police is obviously enjoined to ensure that there is no recurrence of that and to take appropriate steps in accordance with the law,” Gonsalves told reporters.

But Eustace, in a statement Thursday afternoon, questioned Gonsalves’ claim about the spray painting, saying Gonsalves “failed to explain how that was possible, since he has installed armed guards there on a 24-hour vigil”.

The Opposition Leader did not comment on Gonsalves’ report that the Supervisor of Elections was “assaulted, threatened and intimidated”.

Eustace, however, said of the spray paint claim:“Is this, another attempt at a government set-up?”

Supporters of the NDP have been protesting outside of the Electoral Office since the Dec. 9 general elections, which they claim were stolen by Gonsalves’ Unity Labour Party.

Electoral officials say the ULP won 8 of the 15 parliamentary seats and the remaining 7 went to the NDP — a carbon copy of the 2010 election results.

Regional and international observers have declared the elections free and fair.

Police on Wednesday removed the protester, a decision that led to the arrest of Washington-based Vincentian activist Luzette King, who was charged with a public inconvenience offence.

Gonsalves, speaking at a press conference on Thursday, said Vincentians are peace-loving and all members of the Police Force recognise that.

He said this is why the police have been restrained in the exercise of their authority even when protesters are breaking the law.

“And. Clearly, they have determined in their approach to temper firmness with sensitivity,” said Gonsalves, who, as Minister of National Security, has ministerial responsibility for the Police Force.

“But it is for the management of the Police Force to consider whether or not their embrace of sensitivity has been such that it might have softened the firmness.”

He said protesters would be in error if they mistake “generosity and sensitivity as signs of weakness, … particularly when they cross the boundaries from a simple protest to engage in activities which offend the person or property of others.”

He described as “propaganda” Eustace’s statement on television about the decision of the police to remove the protesters and arrest King.

He said the protest at the electoral office is taking place within 200 yards of the Financial Complex.

Several government ministries have their head offices in that building, which, like the Electoral Office, is located on the reclamation site.

Gonsalves said police said the protestors could not remain in front of the Electoral Office because the Supervisor of Elections was intimidated and people have behaved in an unruly manner.

The protest were originally held in front of the Financial Complex, but protesters said police asked them to move in front of the Electoral Office and erected barricades.

Police have the authority to disperse individuals and to ask them to move elsewhere, Gonsalves said.

“That’s under the Public Order Act,” he said.

Section 6 of the Public Order Act says, “For removing doubts, it is hereby declared that no person has a right to hold a meeting in a public place.”

Gonsalves, who is also a lawyer, said: “So if you hold up placards in relation to any matter and you are gathering, it’s a public meeting.

“And, incidentally, you have to give the notification for the meetings to be held.”

He reiterated that police have been “firm and sensitive” but added, “… but people who are engaging in protest must know that when the boundaries have been crossed and the police decide to be firm, that you must follow the police’s instruction. … Of course, you may decide voluntarily that will pay the price of the law. But you can’t then decide that, and then proclaim yourself to be a martyr.”