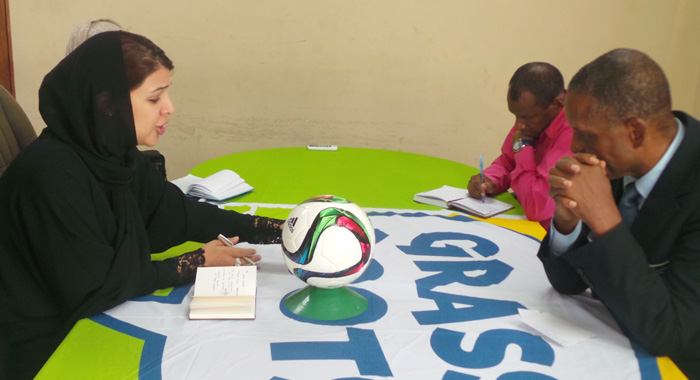 Minister of State in the United Arab Emirates (UAE), Reem Al Hashimy and president of the SVG Football Federation (SVGFF) Venold Coombs held discussions on Tuesday at the Federation’s office in Kingstown where a number of issues relating to football development were discussed.

The meeting, which was described as “excellent” by both parties, explored ways in which the Gulf state can help the SVGFF in realising some of its programmes. Among these are a home for football, expansion of a grassroots programme and the possibility of Vincentian footballers securing contracts in the UAE.

Al Hashimy assured the SVGFF head that efforts would be made to see what level of assistance can be provided with regards to his needs and requested a proposal in the next few months to begin the process of lending assistance.

“We want to work with you in partnership on a participatory level and not giving you hand-outs, which we know are not what you are looking for,” Al Hashimy said.

She said that her visit to SVG was her maiden trip to the Caribbean, where she also met with officials in Guyana and Grenada.

Al Hashimy said that her government is seeking to have a good relationship with countries in the region as a way of showing their appreciation for their support in helping the UAE win the bid to host EXPO 2020.

She said that her area of interest is youth and sports development and she will be exploring all possibilities with her government in making contributions to regional governments including SVG, with projects that impact these areas.

“If you know what you want and what you need then we can begin to get to work quickly. If you can articulate what you want and show how it aims towards your overall vision then we’re willing to share our support and knowledge,” she said.

Coombs, who was praised highly by the UAE minister, suggested that some level of support in realising a home for football as well as providing technical support as among the most pressing issues facing the Federation.

Al Hashimy, who was elected a minister in 2008, is the managing director for the Dubai World Expo 2020 Bid Committee.

She is also the chairperson of Dubai Cares, a children’s education charity established by Sheikh Mohammed Bin Rashid Al Maktoum in 2007, which is looking to expand its charitable portfolio.