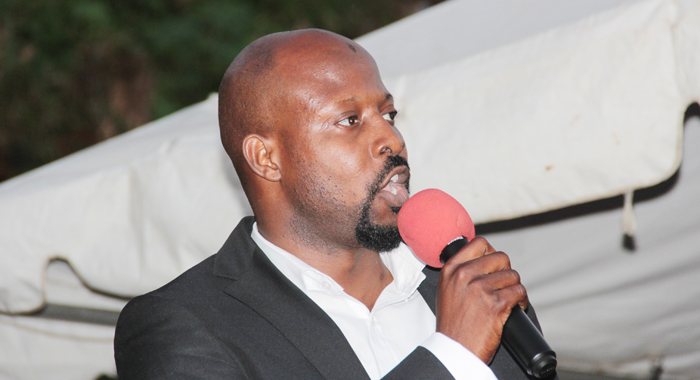 Lawyers for embattled opposition politician, Ben Exeter, has noted the gun offence charge brought against him for carrying his licensed firearm in Kingstown and have asked why similar charges have not been brought against government politician, Carlos James, who admitted to discharging a firearm in public last November.

Further, the lawyers, Kay Bacchus-Browne and Israel Bruce, have questioned whether James holds a licensed firearm and whether the weapon he discharged was the one he is licensed to carry.

Asked at a press conference in Kingstown on Tuesday if, in her opinion, James contravened any laws when he discharged the firearm, Bacchus-Browne said that James said he was defending himself.

“And that is a question for the police to investigate and find out if he was, or not,” Bacchus-Browne said.

She noted that the Firearm Act gives the holder of a licensed gun permission to discharge it in the protection of themselves or their property or the person or property of someone else.

“I have heard that this is the section under which Carlos is saying he defended himself. Persons who were present may not agree that it was in defence of anybody at all but it was an act actually of aggression,” Bacchus-Browne said.

“I am not in a position to make a determination on that, because I was not present. But, in all fairness, it ought to be investigated,” she said.

James told iWitness News in November that he discharged a firearm in Petit Bordel to quell a “rain of missiles” that he said supporters of the New Democratic Party (NDP) were showering on supporters of his Unity Labour Party (ULP) who had gathered for social events close to each other.

No charges were brought against James, but Exeter has been charged for having a firearm at a public meeting.

Exeter was arrested near parliament on Dec. 29, where opposition supporters had gathered in the streets in protest against the installation of the new government.
The charge, last Thursday, came two weeks after Exeter was arrested on Dec. 29 and slapped with three charges for resisting arrest and assault.

“And many persons are asking questions why is it that Carlos James was not charged or any investigation into him, but yet there is this investigation and charge into Ben Exeter,” Bacchus-Browne, told the press conference.

“I would not say that Carlos James, just having a firearm on him, if he has a license for it, in a public place, that would be an offence,” said Bacchus-Browne, who is also a human rights activist.

“Be that as it may, we have a theory that Mr. Exeter was only charged because they want to harass him politically,” Bacchus-Browne said.

James has told iWitness News that he has a licensed firearm.

Speaking at the same press conference, Bruce, who is also Exeter’s lawyer, followed up on Bacchus-Browne’s point about the reaction of the state to the incidents involving Exeter and James.

Bruce said that the question that the Vincentian public would want to ask is “Whether or not at the time, in constituency of North Leeward, there was an on-going meeting.

“If it was, then quite naturally, there was a meeting and we do know that there is admission that a weapon was exposed and ammunition was released from that particular weapon,” Bruce said.

He told the media that a further question is, if there was proper conduct of investigation, why haven’t there been charges laid against Carlos James, but there is a charge against Exeter.

Bruce noted that James and Exeter contested the Dec. 9 elections on behalf of the ULP and NDP.

Both politicians lost in North Leeward and Central Leeward, respectively.

Bruce reiterated that the defence is “very satisfied in our minds that this (the charge against Exeter) is tantamount to political witch-hunting.”

He said some persons on social media sought to dismiss this as if it is not the reality.

“But when you look at the reality and the final charge, … we have a situation where — for those of you are following as precisely as you should — the Commissioner of Police made certain declarations about the initial two charges and 16 days later, we have this charge coming against Mr. Exeter in relation to the weapon.”

The News newspaper has reported that Police chief, Michael Charles said that the first three charges against Exeter were laid after he intervened sometime after he was taken into custody.

Charles is also said to have been “mad” about the way his officers handled the situation.

Bruce said that police relieved Exeter of his licensed firearm when he was arrested and told him that it would be returned to him 24 hours later.

“So, the question you have to ask is this: Was there an offence with regards to the weapon at that time?

“If so, why didn’t the police proffer that charge or those sets of charges on that particular day?

“Well, the answer to that question is nothing but obvious: that there was nothing for which to charge Mr. Ben Exeter with regards to the weapon, which he has been licensed to carry. He did indicate that he was carrying his license upon which the basis to so do exists,” Bruce said.

“So, the witch-hunting continued. And if you are minded to follow what was happening in the public sphere, you would recognize that that particular charge did not come to Mr. Exeter until the Prime Minister of St. Vincent and the Grenadines, who is the leader of the Unity Labour Party, made certain public pronouncements about that particular act, which is the Public Order Act and the particular section under which Mr. Exeter has been charged.

“So, did the police really have a genuine charge against Mr. Exeter, which they have now put on paper? Our response is very clear: no, but that the political witch-hunting continued and on this particular occasion, clearly, orchestrated by Dr. Gonsalves, setting the framework and putting out the call for this charge to be laid.

“We remain in our position steadfastly that Exeter is being pursued politically and the use of the law court is tantamount to a charade that should not happen in St. Vincent and the Grenadines,” Bruce said.

“As far as I am concerned, there is no legal basis for it. These are political charges and in a court where it is expected of us to get a free and fair hearing, the charges should be thrown out,” Bacchus-Browne said.