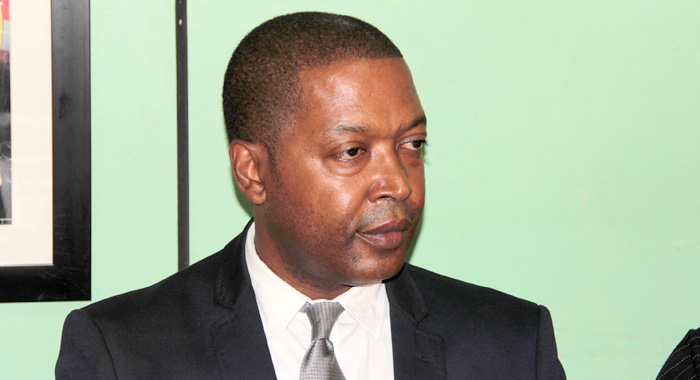 The relevant authorities, on Dec. 30, rescinded opposition politician Ben Exeter’s permit to carry a firearm, one day after he was arrested in Kingstown and charged with assaulting a police officer and resisting arrest.

Kay Bacchus-Browne, one of the New Democratic Party politician’s lawyers, told a press conference on Monday that the rescinding of the licence was done in “a very undemocratic, autocratic way.

“It was just taken away from him,” she said, adding that Exeter intends to appeal the decision.

Israel Bruce, another of Exeter’s lawyers, speaking at the press conference, said:

“The most you can make of that is whether or not that adds to our claim that he is personally being pursued.

“Why is it that somebody who has the requisite licence to carry the firearm, when he was found to have it on him, indicated that I do have the requisite licence to have this on me, they ask that it be handed over, he handed it over. The evening, when we were addressing the matter, we were told that tomorrow (the following day) that he would be reissued with the gun. And, following court appearance on that day (Dec. 30), he was presented with relevant documents to sign and was advised that his licence is being revoked.”

Bacchus said that Exeter’s legal team calls the decision to rescind the gun “a flagrant abuse of authority”.

Bruce added: “And what I want to add is not just his licence [was] revoked, but that Carlos James …, as far as we know, continues to hold his licence, if he has one.”

Exeter was arrested and charged with resisting arrest and assaulting a police officer on Dec. 29 in Kingstown.

At the time of the arrest, he was in the street outside Parliament, where persons had gathering for the opening of the 10th Parliament.

He had his firearm on him at the time, but was not charged in connection with the weapon.

He was charged last Thursday with an offence under the Public Order Act, one week after Prime Minister Ralph Gonsalves suggested at a press conference that he could be charged with contravening that legislation.

Exeter’s legal team has contrasted the response of the state to their response to an incident in which ruling Unity Labour Party (ULP) politician Carlos James discharged a firearm in Petit Bordel last November.

“His (James’) has not been revoked and I want those persons who are listening and those who read to make what you make of it, if this is not persecution of Ben Exeter and if there is not an objective behind it,” Bruce said.

The NDP is challenging the results in court.

“When we speak the way we speak, the name and names of Margaret London and Carlos James must come back to your minds,” Bruce said.

“You would recall that when Margaret London was to contest general elections [in 2010], the issue as to her criminal record became the operational axis, and in 2015, you know that there was a spat between [MP for North Leeward] Roland Matthews and Carlos James, as to whether Carlos James was considered qualified to contest because of a criminal activity for which he was charged prior,” Bruce said.

“So, is the objective to make sure that Ben Exeter has a criminal record, so that whether, upon the prayerful considerations of those who have aspired to pray, so that whenever their considerations are being made, that Ben Exeter would be caught in the cold and cannot have his name placed on the ballot? We say that that is part of the overall act in the scheme of things.”

Asked if he now feels unsafe because he doesn’t have a firearm, Exeter told journalists:

“I applied for the firearm licence to protect myself and my property. Now, I have no protection. My house was burglarised four times in the last year and a half prior to receiving my licence.”

Exeter said he had the licence since May 2015.