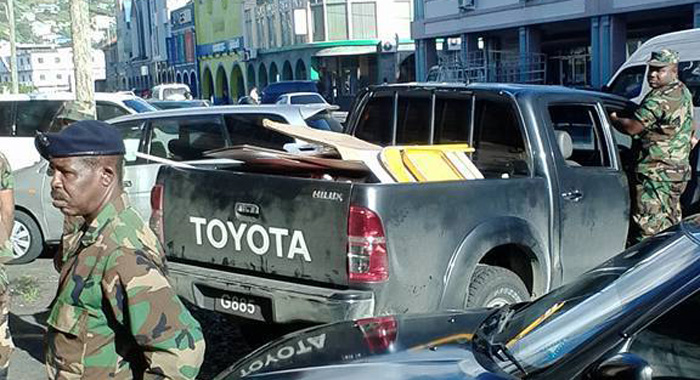 Nine persons were in police custody Wednesday evening having been arrested for what police say was a failure to observe the outer limit for protesting near buildings in which the head offices of government ministries are located.

The protesters, supporters of the main opposition New Democratic Party (NDP), were picketing outside the Electoral Office in Kingstown, where daily demonstrations have taken place since the Dec. 9 general elections.

“The distance from any ministerial building for protester where they should assembly is 200 yards,” Commissioner of Police Michael Charles told iWitness News Wednesday evening.

“And, 200 yards from the Ministry of Finance and the Ministry of National Security takes us somewhere in the vicinity of the Chinese restaurant, just above the electoral office,” he said.

Those ministries are located in te Financial Complex on the reclamation site, where the Electoral Office and private businesses are located.

“This morning, they (protesters) had chairs, coal pot, ice boxes, etc there and so on, and the police asked them to move. They refused. Those were taken up. The police asked the people to move, to the distances, and those who didn’t, they were arrested.

“They are now being processed at Central [Police Station] with a view, most likely, they will be charged,” Charles said.

He said police have not decided if they will charge the protesters.

“We ain’t cross that border as yet really. But as I speak, they are in police custody,” he said in an interview at 4:30 p.m.

The police chief said he was not too sure what charges may be laid against the protesters.

He, however, said: “I know for sure, unlawful assembly would be one of those charges; being beyond the specified distance, that would also be another one. So, clearly, maybe two charges.”

The arrests came one day after police removed barrier that they had erected near the electoral office since December when the protest began.

The protesters are demonstrating against the results of the Dec.9 general election, which the NDP says that the ruling Unity labour Party (ULP) “stole”.

Charles said that police decided to remove the barriers on Tuesday because they were an inconvenience to business owners in the area, who had to park elsewhere.

He said police decided that they would not prevent persons from protesting, “but they would have to protest as if the barriers were there”.

And, after the arrest of the protesters, Leader of the Opposition and NDP president Arnhim Eustace and other persons gathered in protest at the same area.

Eustace also called out NDP supporters to protest in the area on Thursday.

Speaking on the NDP’s radio programme, Eustace said he regards the action of the police as “reprehensible”.

“And we have to respond,” Eustace said, adding that lawyers for the NDP were dealing with the arrest of the protesters.

He said that the protesters did nothing wrong, but were “exercising rights which have been guaranteed under the constitution of St. Vincent and the Grenadines and other laws.”

Eustace said the nation has just gone through a bruising election protest and noted that the protests are in connection with those elections.

He pointed out that he announced on Tuesday that the NDP would protest in other areas of the country.

“The action taken today requires us to make a response in the New Democratic party. And I am calling on our members, wherever you are, in whatever constituency you reside, to come back to that spot tomorrow morning and continue the protest.”

“As President of the New Democratic Party, I am asking all of our people who can make it to come into Kingstown tomorrow to protest the action taken by those in authority.”

Eustace also noted that the hearing in the election petitions filed by the NDP is scheduled to begin on Thursday.