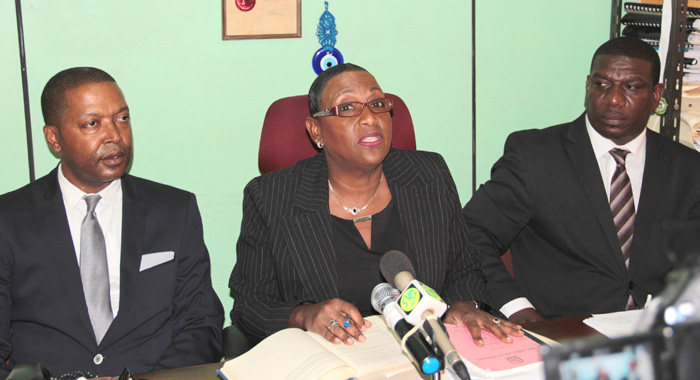 The Public Order Act, under which opposition politician Ben Exeter was charged for carrying his licensed gun in public, does not apply to licensed firearms, one of his lawyers said on Tuesday.

Kay Bacchus-Browne, who is also a long-time licensed gun holder, told a press briefing on Monday that she does not think that the Public Order Act has any application as such to a person who has a lawful firearm, adding that this is the remit of the Firearms Act.

“This is the law that governs firearms, not the Public Order Act,” Bacchus-Browne said.

“The Public Order Act, … if you look at the Act, it is ‘An Act to prohibit the wearing of uniforms in connection with political objects and the maintenance of private person of association with military or similar character; to make further provision for the preservation of public order or the occasion of public processions and meeting in any public places,” she said, quoting the law.

“So, obviously, many persons would be wondering why, all of a sudden, it has become an offence to have a firearm in a public place at public meeting.”

Exeter, a candidate for the main opposition New Democratic Party (NDP) in the Dec. 9 general elections was, last Thursday, charged with carrying his gun to a public meeting.

The charge came two weeks after he was charged with three offences after his arrest in Kingstown, where opposition protesters and government supporters had gathered for the opening of the 10th Parliament.

Bacchus-Browne noted that the   Firearms Act says, “Subject to the proviso of Section 29 (2), a person shall not carry a firearm or ammunition in any public place unless he has on his person a license permit or certificate granted by the appropriate person authorising you to do so.”

Bacchus-Browne, noting that she has a licensed firearm for many years, said that when one is issued to a person, “You are even told by the police that you should keep your firearm with you at all times because it is for your protection.

“It would be ludicrous to give you a firearm, and, on the other hand, say that if you ever went to a public meeting with this firearm that you are committing an offence.”

She told the media that since the charge against Exeter, she has received many inquiries from licensed gun holders “suddenly wondering if it is an offence to appear at a public meeting with a firearm”.

The firearm charge against Exeter came one week after Prime Minister Ralph Gonsalves, who is also a lawyer and Minister of National Security, suggested at a press conference that such a charge could be brought against him.

But Bacchus-Browne is contending that the events in Kingstown on Dec. 29 did not constitute a public meeting, as defined under the Public Order Act.

“The Public Order Act is dealing with meetings where you have to call the Commissioner of Police or write the Commissioner of Police and get permission to hold the meeting. So even if it is deemed to be a public meeting, I still hold that what was going on when Ben Exeter had his gun was a demonstration, which he has a right to do under the Constitution. The Constitution is the highest law of the land, and it takes precedence over the Public Order Act,” Bacchus-Browne said.

She said that notwithstanding, the Public Order Act cannot take precedence over the Firearms Act.

“The Firearms Act is the act under which he was granted his license.”

Exeter’s next court appearance is on Monday, Jan. 25.