Govt launches another initiative to take gain$ out of crime 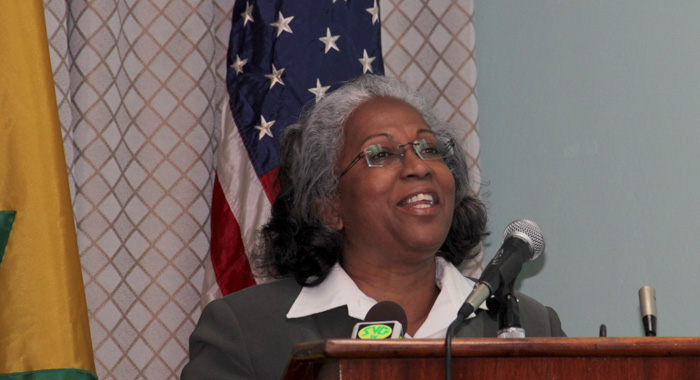 The Government of St. Vincent and the Grenadines on Friday launched the Civil Asset Recovery Division (CARD), another initiative aimed at taking the gains out of crime.

Attorney General Judith Jones-Morgan said the introduction of civil recovery legislation also sends an important message to would-be criminals and young people: “A life of crime will not result in wealth and power but ultimately in shame, imprisonment and poverty.”

She told the ceremony in Kingstown that criminals will not be permitted to operate with impunity in SVG, leading to frustration among law-abiding citizens and allowing the criminal justice system as a whole to fall into disrepute.

“Civil recovery provides us with a new and powerful weapon against serious crime, and it is of vital importance that we utilise the powers to their full potential,” she said.

She said that post-conviction confiscation has been available as a tool for law enforcement and prosecutors in SVG for over a decade.

“However, in the last 20 years, the nature of crime has changed,” the Attorney General said, adding, “Crime today is largely cross-border, it is hugely profitable and those who commit crime use increasingly sophisticated methods, including technology which permits swift and undetectable transfer of money.”

She said these provisions exist in Dominica and other jurisdictions worldwide.

“It is necessary for our country to suppress the conditions that lead to unlawful activities as leaving property in the hands of those who facilitate these activities creates a risk that he or she will continue to use that property to commit unlawful activity.”

It introduces civil recovery powers in SVG, and is a significant step forward in the on-going fight against crime, she said.

The Attorney General said SVG welcomed this new addition to its Proceeds of Crime legislation and intends to fully utilise it in taking the profit out of crime.

“Most crimes are motivated by profit and by recovering the proceeds of crime we will send a clear message that crime does not pay. It will also prevent criminals from furthering their criminality and decrease the risk of instability in our financial markets.”

In short, recoverable property is property obtained through unlawful conduct or tainted property, or property that represents such property.

Jones-Morgan said that in keeping with a memorandum of understanding between the Government and the Bureau of International Narcotics and Law Enforcement Affairs (INL) two fellows — an attorney and investigator — will be attached to the CARD for a period of three years.

The fellows will come from within the SVG Financial Intelligence Unit (FIU) and will work to investigate and develop Civil Asset Recovery cases.

It is expected that this programme will then be constituted by the Government of SVG for a further three years, Jones Morgan said.

“The Government has the people-centred vision, the philosophy, the historical sensibilities, the policies and the programmes to uplift further the stability of life of Vincentians of all walks of life.”

Jones Morgan noted that SVG is a pilot in implementing civil asset recovery.

“I have every assurance that the Government will continue to give its full support to the FIU. Indeed the Government has pledged that under its administration, St. Vincent and the Grenadines will remain a country which will neither support nor tolerate money laundering, terrorists and fraudsters. It has asked all of us all to work together to shape the nation’s future for the better with Labour Love. I applaud the efforts of the FIU and INL and wish them both continued successes as they move from strength to strength,” she said.