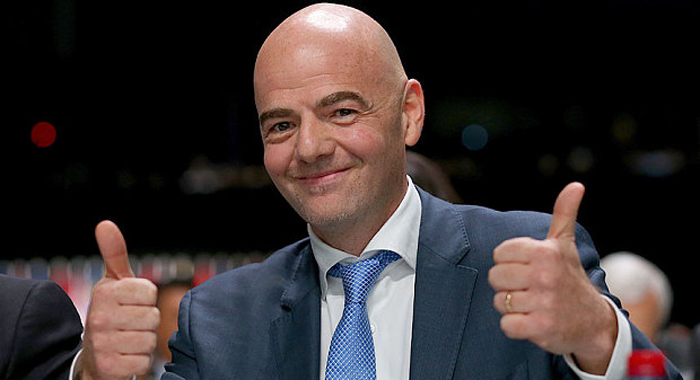 Gianni Infantino has been elected president of FIFA. (Internet photo)

He succeeded embattled Sepp Blatter to become the ninth president in the organisation’s 100 plus year history.

“We have to support people who will look out for the smaller countries like us and I am confident that Mr. Infantino will do just as he said,” Coombs said.

“We know that there would be the large countries like Germany, England and the likes who would be able to influence certain situations but we believe that he would help to develop the smaller nations,” Coombs added.

Infantino’s passionate plea to the FIFA Congress clearly won over some voters who may have been unconvinced of his credentials to run world football’s governing body. Analyst believe that one of the new Infantino’s central manifesto pledges — to more than double development grants to FIFA’s federations to US$5 million — was possibly the key to his victory.

The FIFA presidential election entered a second round of voting for the first time since Brazilian Joao Havalenge beat Sir Stanley Rous of England in 1974, after Infantino of Switzerland secured more backing than pre-vote favourite Sheik Salman bin Ibrahim al Khalifa of Bahrain in the first round, when a two thirds majority was required to win.

A simple majority of more than 50 per cent — 104 votes — was sufficient for victory in the second round.

Coombs said that the SVGFF has an excellent relationship with UEFA and based on that, Infantino was always going to be their man after front-runner Michel Platini was forced out of the race.

He said that over the years, they have received support from the European ruling body and they expect to see this continue as the SVGFF moves forward with its programmes.

Coombs, along with vice-presidents Otashie Spring and Marvin Fraser, attended the Congress.

Infantino, Platini’s former right-hand man, will serve the remaining term of office for which Blatter was elected last May, meaning there will be another election in 2019.