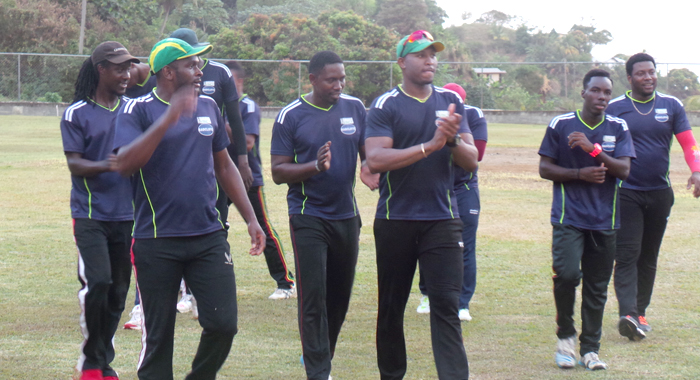 LIME Radcliffe are into their first week as reigning champions of national T20 cricket.

They earned this honour after beating three-time defending champions, Team Rivals in the final of the National Lotteries Authority T20 competition at the Park Hill Playing Field on Sunday in front of a reasonable crowd.

Winning the toss in good batting conditions with a pitch that is always at its best in the first half of the day, Team Rivals chose instead to field, citing their batting depth and the firepower to chase down targets.

Captain Lindon James and his LIME Radcliffe teammates never needed a second asking and openers Romano Pierre and Kadir Nedd both former SVG U19 captains wasted little time in putting runs on the board.

They raised 80 for the first wicket in 9 overs before Pierre (39) was caught off the bowling of legspinner Olanzo Jackson trying to flick through the onside. Century-maker in the semi-finals against News Spartans, Jomo Toney (1), did not last long as he was caught at the wicket off the pacey Keswick Williams as he with little conviction tried to hook a bouncer but only gloved it to the ‘keeper.

Rodney Lawrence (10) joined Nedd in adding 73 for the third wicket with the latter stepping on the pedal. But LIME Radcliffe lost 3 for 8 in the middle as Lawrence, James (6) and Nedd (72) fell in the search for more runs.

Nedd, who dealt with spin and pace with the same disrespect, was bowled by left-arm spinner Asif Hooper when he badly missed a long hop. He struck 5 fours and 5 sixes as Williams finished with 2/30 but Jackson was the best bowler with his 4 overs only going for 19 runs. There were 30 extras inclusive of 19 wides.

Team Rivals, who were pushed into the ascendancy by the opening pair of Hooper and Marvin Small most times during the tournament, were once again put in a good position with an opening stand of 45 in 6 overs. Hooper (25) was first to go when he was caught off medium pacer Westrick Straugh. Small (24) and Hyron Shallow (1) then went with the addition of 8 runs.

Casmond Walters (18) and Harley Skerritt then added 52 for the fourth wicket but at a less than ideal rate. Walters went at 107/4 and Roneil Jeffrey (4) who used up a lot of balls departed at 123/5.

A late barrage of blows by Skeritt and Deighton Butler (14) only created some excitement but never threatened the target. In the end, Skerritt was left unbeaten on 65 with his team 156/6- still 29 runs short. He struck 4 fours and 4 sixes.

Straugh finished with 3/26 and James 2/27 to seal victory for LIME Radcliffe.