Grammar School students exposed to use of ICT in professions 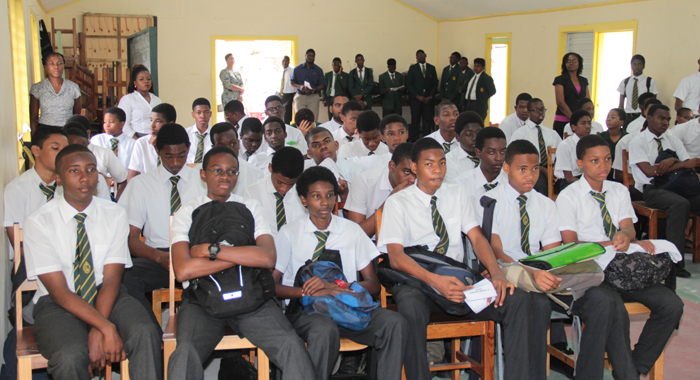 Grammar School students at the opening ceremony of their ICT Fair. (IWN photo)

Students at the St. Vincent Grammar School (SVGS) were this week engaged in discussion with various professionals about the practical use of information and communication technology (ICT) in their various fields.

The school held its first ICT Fair under the theme, “Connecting ICT to your world.”

The fair targeted Form 3 and Form 4 students and was aimed at introducing students to the practical use of ICT and to show them how ICT is used in the various career fields.

Speaking at the opening ceremony of the one-day event on Tuesday, ICT co-ordinator at the SVGS, Simone Williams, told students that the use of ICT goes beyond social media and other recreational use of technology.

The SVGS, she said, wants its students to understand that when they enter the world of work they will have to use ICT.

“What you learn in the classroom would have to be put into use,” she said.

SVGS headmaster, Curtis King, said the school has identified the enhancing of the integration of ICT in the teaching-learning process as one of five priority areas for this school year.

The SVGS has ensured that each department is represented on the ICT committee to ensure that programmes are broad-based and reach as many students as possible, he said.

Further, the school has acknowledged that it had to put in place the material as well as non-material structures to ensure that the objective of having the integration of ICT in the teaching-learning process was attainable and relevant.

King said that through the efforts of the committee, the school has formulated an ICT policy, which was recently adopted.

It has created a network on campus where teachers can access the school’s website and make inputs into the e-markbooks.

Further, the school has installed overhead projectors in its science laboratories, except the chemistry lab, and is exploring the publication of e-newspapers.

“So, we are, basically, coming from the standpoint where we are, as most successful institutions would do, seeking always to enhance and improve the services that we deliver. And clearly, this school, the St. Vincent Grammar School has a history of success. We are seeking always to build on that success,” he said, adding that the facilitators at the ICT fair were from the private and public sectors.

The principal further said that he hopes that the students will use the activity to help them to make the choices as it relates to their subject options for the final two years of school.

Delivering the feature address, ICT co-ordinator in the Ministry of Technology, Phillip Jackson, told the students that more than two decades ago, his physics teacher, Clare Keizer, brought them together and taught them basic computer language.

He said that, like with many things sometimes, the leadership is not always present. Keizer left the school soon after and the idea and the programme left with her, he said.

Jackson said he would make one change to the theme — replace “your” with “our”.

“By shifting ‘your’ to ‘our’, you are accepting ownership of ICT and ownership of the challenges, and owners of the problems in your immediate environment, in your school, in your community, in your country… And when you own something, you want to protect it, right?”

He said the government’s investment in ICT in recent years amounts hundreds of millions of dollars.

“For a small country with very slender resources, that is a tremendous investment,” he said, adding that the investment was “way outside the scope that some countries, as a share of their total wealth, would make.

“And I want to say to you, the government has already made major investments, I am happy that the St. Vincent Grammar School has taken the initiative, to say, you know what? We are going to respect that investment and we are going to maximize its use,” Jackson said.

He, however, pointed out that the Government can only do so much, but if the people do not take the resources and fashion them into something worthwhile, then the investment would have failed.

He also challenged the school to share with other schools what it has learnt about the use of ICT.

Jackson also told the students “something that you are going to use to put pressure on my government, on our government”.

He said that the government has in Arnos Vale a new lab with very good computers, including Macintosh and some of the latest Windows.

They are fitted with software to develop apps and other programs, Jackson said.

“I want you to talk with each other and talk with your parents and get them to open up the lab so on weekends, those who are interested in creating things for ICT can get together and do some serious work on some powerful computers.

“I am challenging you. It’s there, it’s underutilised. It can make a serious difference in ICT development. Greater access would help you to do that. So I am challenging you to get together and lobby so you can get open access to that lab.

“I don’t know how it would work out, but I am sure if you lobby, if you advocate, then somebody might respond to you,” Jackson said.