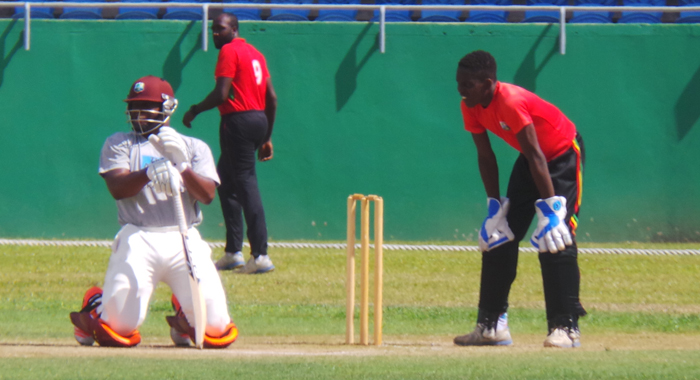 Pope praying for a chance.

Forty-three years after becoming the first regional team to play a first-class match at the Arnos Vale Playing Field, Jamaica Scorpions, led by a virtually unknown Paul Palmer, return to the scene of that 86-run defeat at the hands of the Irvin Shillingford Combined Islands in what was then the Shell Shield Cup to take on the Windwards Volcanoes.

The two teams sported some of the biggest names in regional cricket, with Jamaica showcasing the elegantly classy Lawrence Rowe, the prolific Maurice Foster, wicketkeeper-batsman, Desmond Lewis, legspinner Arthur Barrett and the lightening quick Uton Dowe who had all represented the West indies, along with Herbert Chang, who later played for the West Indies.

The uncomfortably quick left-arm pacer Cecil Lawson was also part of the lineup.

The Combined Islands, though not boasting that constellation, held up wicketkeeper Mike Findlay and Grayson Shillingford as test players at the time with the competent and efficient runmaker Irvin Shillingford tapping on the door and the talented Livingston Sargeant who had returned from his ban.

Left-arm spinner Elquimedo Willet who was to make his test debut a few months later was possibly the most talked about person before and after the match with his battle with Rowe, which last only a few overs given folklore status probably more for the fact that the bowler got the batsman out than any act of genius.

Rowe, on 18, had played Willet watchfully on the slow turning pitch for most of his innings but misjudged one which he thought was going away only for the ball to turn back in and hit his pad without him offering a stroke. It was sheer pandemonium. Willet was named in the West Indies team to play Australia a few hours later. The match incidentally was played by one Vivian Richards who had a low -keyed had scores of four and 14 and was dismissed on both occasions by Dowe.

Willet in that match which was number 29540 became the first bowler to take five wickets in first-class match at the Arnos Vale Playing Field when he took 6/40 in the Jamaica second innings.

Forty-three years that initial encounter and going into the 55thfirst class match at the venue the two teams boast a combined total of four test players in Devon Smith of the Windwards (38 test) Kirk Edwards Barbados and Jamaica ( 17 tests) Nikita Miller (one test) and Jermaine Blackwood Jamaica (15 tests). Blackwood is the only one who is currently in the test team.

The two teams go into the match looking to turn around their fortunes after some disappointing performances with three-day defeats at the hands of the Jaguars in the case of the Windwards Volcanoes and the Pride over the Scorpions in the previous round before the break.

The records show that both teams have done well at home under the home and away format for the R4Day. The Volcanoes were beaten by the Scorpions away in the early match and will be looking to exact a measure of revenge on their opponents.

This will be the second time in two years the teams will meet at Arnos Vale Sports Complex with the Windwards enjoying an innings and 22 run win in 2015 thanks to an unbeaten century by Andre Fletcher and a 6-wicket haul by offspinner Shane Shillingford. Both men are absent with Fletcher on West Indies World Cup duties and Shillingford out injured.

Last year Blackwood got 96 before a severe bout of cramp restricted his movements thereby possibly robbing him of a century.

The pitch looked to be on the slow side and could possibly favour spin with Jamaica’s left-arm spinner Nikita Miller who is the leading bowler this season and is fresh off a 10-wicket performance against the Pride and legspinner Damion Jacobs a perennial bugbear in the skin of the Volcanoes set to be in their element.

The Windwards will be hoping for another good hand from the prolific Smith with supporting roles from the talented Sunil Ambris and debutant pugnacious opener Gidron Pope. The Volcanoes will also be hoping that Jerlani Robinson can maintain his good form and Tyrone Theophile who has been having a lean season get amongst the runs in this match.

With the pitch more than likely to take spin the Volcanoes may well end up in a predicament as to who to partner captain Liam Sebastien.

Left-arm pacer Delorn Johnson who has been mystifyingly omitted from the team has been included in the 13 and could get his chance on his home ground to confound the Volcanoes selection panel, while Pope who was called up but left out of the Guyana defeat will be praying that the “cricket gods” show him favour this time.