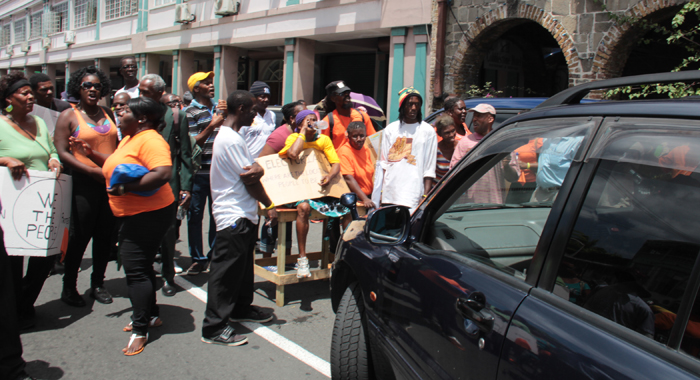 Protesters blocked the road in Kingstown on Friday. (IWN photo)

Police and protesters clashed in Kingstown on Friday as police tried to remove from the streets protesters who had caused vehicular traffic to come to a halt on Bay Street, near the Electoral Office.

The protest was organised by “We the People”, a group of persons who seem not to want their individual identities to be known.

Radio personality and pro-NDP activist, Laverne Phillips, identified herself among the organisers of “We the People” protest.

“Today, we are here because I think a lot of us as Vincentians, we are sleeping and it’s time for us to wake up,” Phillips told iWitness News before the clash between police and protesters.

“I think Vincentians are being treated as fools by the current ULP regime and it’s time for us to stand up as a people, take back this country,” she said.

“Who knew that the very government who claimed that they are for the poor would be against the poor in such a way,” Phillips said.

Asked to explain, she said:

“A lot of us never expected that after the general elections you would have seen VAT on stuff like salt, like sugar, like flour. These are the basic things,” Phillips said.

She told iWitness News that many poor Vincentians did not anticipate that the Gonsalves administration — which was elected to a four consecutive term in office in the Dec 9 general elections — would have implemented such a fiscal policy.

The Budget was passed without contributions from the opposition, which boycotted the debate as part of their continued protest against the election results, which they are also contesting in court.

“Look at the state of our roads,” Phillips told iWitness News.

She said that through the protest, “we are hoping to get some sort of recognition and we will do it until we are recognised and we have free and fair elections again.”

Asked who is “we”, Phillips said, “We the people.”

She added: “If the opposition chooses to join us after, then it is up to them. If they decide to support us after, we would be happy for that because it is one cause.”

Opposition Leader Arnhim Eustace was among persons standing on the sidelines near the Electoral Office when protesters began blocking the road.

He said the NDP was not involved in organising the protest.

“The protest is organised by a group, but, obviously, it is dealing with issues that we are concerned about.”

He said he was there to lend support.

“We have to lend support,” Eustace told iWitness News.

Asked what he thought about the fact that the roads were being blocked, Eustace said:

“The roads have been blocked several times before and nobody said anything about it; blocked much worse than this. So I am not concerned about that,” Eustace told iWitness News.

Leader of the Green Party, Ivan O’Neal was among the persons in the forefront of blocking the road.

“The economy has almost collapsed,” he shouted.

A male protester told iWitness News, “Labour is bad investment for this country.”

He said that the ULP administration – which came to office in March 2001 — is not ready to manage the country.

“They can’t solve the problem and they are creating more problems,” he said.

Another man who identified himself as North Leeward resident said he was protesting against “the illegality of this government”.

He echoed the NDP’s claim that the ULP stole the general elections.

The man accused Gonsalves, his son, Minister of Economic Development and MP for East St. George Camillo Gonsalves, as well as their cousin, Minister of Works, Sen. Julian Francis, of thinking that they “own St. Vincent and the Grenadines.

“We will do everything to get rid of this dynasty. Look at us. We are all poor people and he continues to fight us down, pull us down, calls us name such as the lowest common denominator, as if we are nothing.

“And I think it is time for us to get rid of him and his dynasty,” the man said.

The clash between police and protesters came after the protesters had marched around Kingstown, obstructing the free flow of traffic.

Activist and radio personality Colin Graham, was arrested earlier in the morning.

He was reportedly charged with being a common nuisance, disobeying lawful instruction, and obstruction of the free flow of traffic.

Ahead of the protest, Gonsalves was asked on Wednesday if he had a comment.

“They protested against the policies in a thing called a general elections three months ago, I beat them,” he told reporters after signing a multi-million dollar loan agreement with the Caribbean Development Bank.

“This is a democracy you know. As long as you don’t break the law, this is a free and democratic country. I look like I worried ‘bout them things dey? You don’t see the older I get the calmer I am?” said Gonsalves, who is also Minister of National Security.

Some political activists say that the NDP is should focus on rebuilding itself even as it contests the election results in court.

They say that the party should also deal with leadership transition and have speculated that Gonsalves would call early election.

“If new elections were to be held tomorrow, them fellas (NDP) going get beat worst.”

But asked he is going to call fresh elections, Gonsalves laughed.

6 replies on “Police and protesters clash in St. Vincent (+Video)”