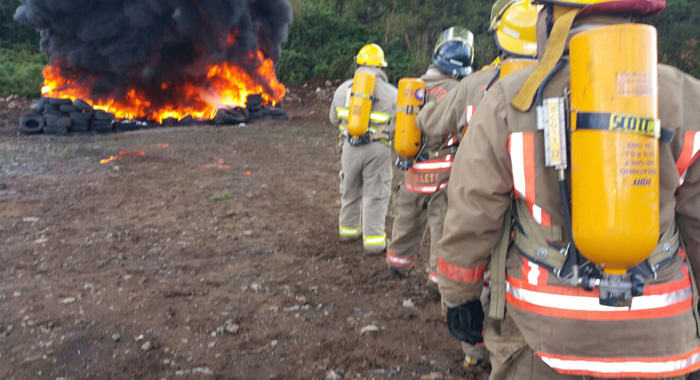 Firefighters engaged in a simulation exercise.

Commissioner of Police Michael Charles has challenged the 28 firefighters who participated in the recent Fire-Fighter I Training Course to put their training to use for the continued protection of life and property.

Charles told the firefighters who are being prepared to man the fire operations at the constructed Argyle International Airport (AIA) that their role is significant because as they march into history they are the first local firefighters to be trained under the exercise.

“You were in awe two weeks ago when you first started your training. I am certain your firefighting appetite is well satisfied. Always remember to protect your life, the life of others and the properties that you may be called on to protect,” Charles said, at the closing ceremony of the Course, held at the Old Montrose Police Station on Thursday.

Charles said the participants, which included experienced firefighters and recruits, will be housed in a state-of-the-art facility at the AIA.

“I see future officers, future chiefs coming out of this programme,” said Cook, as he gave an assessment of the participants performance during the course.

Permanent Secretary in the Ministry of National Secretary Godfred Pompey said: “Today marks a major achievement towards the operation of the Argyle International Airport. …The next phase of fire fighting exercise would be the commissioning of the trucks.”