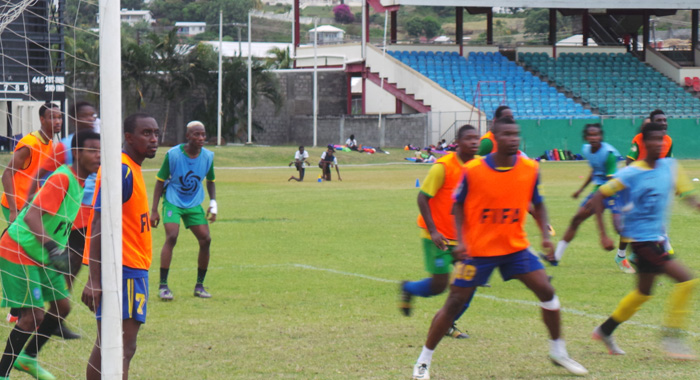 The first r meeting between St. Vincent and the Grenadines and Trinidad and Tobago on the football field as remembered by most Vincentians, was in the finals of the then Caribbean Football Union (CFU) competition in 1979 in Suriname.

In that match, St. Vincent got the better of their more illustrious counterparts from the oil-rich southern Caribbean, defeating them 2-1.

A few weeks later and still smarting from that humiliation, Trinidad invited the Vincentians for a friendly match. The St. Vincent Football Association, still on a bubble with the Suriname result, sent a tired and ill-equipped team to Trinidad where they were taken to a soggy Skinner Park and mauled 0-6. This match, however, is not listed by FIFA as an official fixture, thereby blotting out the largest defeat ever suffered by SVG against a Caribbean team.

In all, there have been 15 matches including the “The Skinner Park Debacle” played between the two teams, with Trinidad and Tobago winning 11 of these and SVG 3 with 1 draw. TnT have scored 46 goals, including thumping 6-0, 5-0 and 5-0 wins. SVG in their three wins, two of which have come in “friendlies”, have scored 5 goals.

Trinidad and Tobago took part in World Cup Qualifications for the 1974 edition of football’s showpiece, which was held in the then West Germany. The final was won by the host, who beat the Netherlands 2-1. The Netherlands were led by Johan Cruyff who died of lung cancer today March 24th age 68 and the Germans by Franz Beckenbauer who is currently being investigated by FIFA on bribery claims.

Trinidad and Tobago, who were able to bring home some of their overseas-based players such as Warren Archibald, Everad “Galley” Cummings and Steve David, missed out on qualifications to Haiti who became the first Caribbean nation to reach the World Cup finals. The Trinidadians, who scored five goals in the match in Haiti, had three of those goals disallowed and went on to lose the game 1-2.

It took the team, rechristened the “Soca Warriors”, another 32 years before they were able to qualify for the Finals when they did so in 2006 in a now unified German.

Seventeen years before that, they narrowly missed out going to the 1990 Finals in Italy, when, needing only a draw against the USA in their last match on November 19 1989, they mystifying lost 1-0, sending the Americans through.

The teams have met twice in World Cup Qualifiers in 2004 for the 2006 Finals and the Soca Warriors have won both matches against their opponents now known as “Vincy Heat” — winning 2-0 at Arnos Vale and 2-1 in the return fixture at the Hasley Crawford Stadium.

But while Trinidad and Tobago, have made strides over the years, SVG, who only began competing in the World Cup Qualifiers in 1992 for the US94 Finals, have been doing the “slow march” and even an “about turn” and at times a near “fall out”.

This has been as a result of lack of finance and limited opportunities overseas for talented players.

However, with the injection of cash by FIFA through what is called the FAP initiative on a quarterly basis, over the years, SVG have been making what many say are more assured steps forward. In addition, the return of Venold Coombs — under whose initiative the country became a FIFA member in 1988 — to the presidency has seen what is described as a more vivacious approach to the development of the sport.

Former national goalkeeper, Paul O’garro, speaking recently on the situation of what is now appears to be a chasm between SVG and Trinidad and Tobago, said it is all about opportunities.

“South (Trinidad and Tobago) do not have better players than us. It is just that their players get the chance to go overseas and rub shoulders with some of the best in the world and they get to build their confidence and improve their standard. But I guarantee you that if our players get to go out there, you will see who is the better talent,” said O’garro who was part of the 1979 squad that beat Trinidad and Tobago.

Another person who expressed similar sentiments recently as well was former secretary of the SVG Football Association, Clive “Bish-I” Bishop.

“It is no way I could see them Southmen being better that our guys if all of them get the same chance ‘out there’ because our players are much more creative than them and we run faster and longer too. It is only the lack of opportunities really holding us back,” the former lsland Scholar said.

The past provide some unfavourable facts for the SVG players against their opponents and they will hope that, that past bares little impact on the futures, which, but for the tenuous line of a few hours, is the present.

The teams will line up in their third World Cup showdown from 3 p.m. today, Good Friday, this time in the 2018 World Cup qualifier CONCACAF semi-final round, with SVG looking to exorcised the “George Preddie” which has haunted them for so long.

And SVG will be going into the game seeking to put the recent bad results behind them, according to head coach Corneilus Huggins.

The Vincentians suffered a 1-6 defeat to the USA in their opening match away and followed this up four days later with a 0-4 home lost to Guatemala at the Arnos Vale Sports Complex. And two weeks ago they had another 0-4 lost, this time to Martinique in a friendly encounter at the Victoria Park.

Huggins said that the team, despite being on the losing side, are fully focused on the match against the Trinidadians.

“Those were poor results and they are in the past and now the guys are concentrating on what lies ahead — a game against Trinidad and Tobago and we must go there to give a good account of ourselves,” Huggins said.

He said that the coaching staff had to wait on some players to visit the physiotherapist to determine their fitness level and the good news is that those players have all come through.

He said that the main unit is fully fit for the most part and that gives him a “good feeling” for the match.

The Trinidad and Tobago squad, unlike their “Vincy Heat” counterparts, boast a number of foreign-based players giving coach Stephen Hart the luxury of being able to call upon a bevy of professionals to take on the mostly amateur SVG unit.

However, Huggins, while admitting that they may not be able field a team of such experience, was quick to point out that it is game played on the field and it is all about match day.

“In the past when people heard about Brazil every team wanted to run and hide. Now, teams no longer are afraid of big names. Our players just have to go and play to the best of their ability and let us see what happens after the 90 minutes,” the former national captain and defender said.

SVG will be looking to Oalex Anderson of Seattle Sounders’, Myron Samuel of Sounders 2, and UK-based Brad Miguel and David Pitt to complement the prolific Tevin Slater on Friday.

Hart, however, would not be having the use of English-born midfielder John Bostock who was deemed ineligible to take part in the match.

And Hart addressed the matter, stating, “It’s a situation where I misread the FIFA documentation and failed to realise that there was an amendment to the original ruling of players switching their country of choice and because John had already played for England at the international youth level, he, as the player, needs to write to FIFA stating that he no longer wishes to play for England and intends to switch to Trinidad and Tobago.”

“It’s unfortunate but we’ve spoken to John and he understands the situation. We will now wait for feedback to see when the process is completed by FIFA to have a better idea of when he can make his debut for us in the World Cup qualification competition,” Hart said.

Bostock would have been eligible to play had it been an international friendly and not an official FIFA World Cup qualifying game.

SVG encountered a similar situation in 2000 when UK based Julian Joachim, a player with Vincentian connection, was called up. However, due to his having played for England at U21 level, he was ineligible to play for the team, only being informed of this upon arrival in St. Vincent for a World Cup qualifier in April 2000.

Huggins said that they would be looking “to get out of the blocks fast and put their opponents under some early pressure”.

SVG are at the bottom of the standings after losing both of their matches, while Trinidad and Tobago are joint top with the USA on 4 points, by virtue of one win and one draw, and Guatemala on 3 points from two matches with one loss and a draw.

One reply on “Vincy Heat praying for a good Friday”