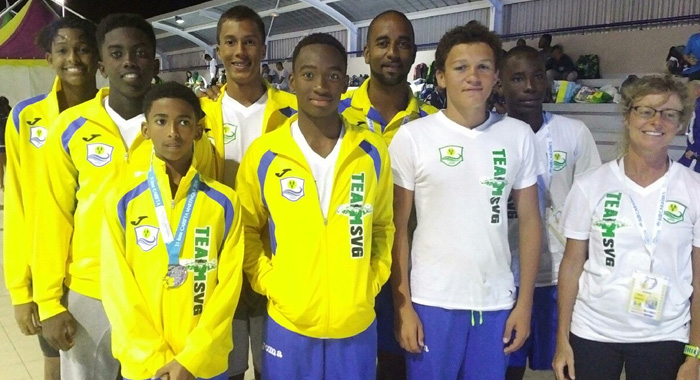 For the first time in Vincentian swimming, St. Vincent and the Grenadines has produced two athletes who captured medals at a CARIFTA Swimming Championships.

Alex Joachim, younger brother of CARIFTA record holder, Shné, swimming in his final year of the 11 to 12 age group, produced the most outstanding performance of a Vincentian swimmer at this CARIFTA level in the short history of Vincentian swimming.

Alex captured two silver medals, was fourth in 2 other events and qualified for the finals in 6 of his seven races.

He finished second and won silver medals in the 50 and 100 meter breaststroke events. He finished a very close fourth (by point 1 of a second) in the 200 meter Breaststroke and the 200 Meter Butterfly events. He swam personal best times in 6 of his 7 races and broke two SVG national records. He is the first Vincentian to capture two medals in his age group.

She set personal best times in all three breaststroke events. This is the fourth consecutive year that Shné has been able to capture medals at CARIFTA.

Shane Cadogan, swimming in the final year of the 13 to 14 age group qualified for three finals and was a close fourth position in both the 50 and 100 Breaststroke events. Cadogan also had personal best times in six of his seven races.

Nikolas Sylvester, swimming in the first year of the boys 15 to 17 years old age group qualified for the 100 meter breaststroke final and finished seventh. The first year of any age group is always challenging and is especially difficult in the 15 to 17 year age category. He also recorded five personal best times.

Cruz Halbich and Aaron Defrietas also represented SVG in the pool events and were competitive in their events.

The swim team was led by Coach Kyle Dougan.

The competition featured more than 450 of the best swimmers from 18 Caribbean countries including the Bahamas, Jamaica, Surinam, French Guyana, Trinidad, Martinique, Guadeloupe and Barbados.

President of the SVG Swimming Federation, Stephen Joachim, said the CARIFTA Swimming Championships are one of the pinnacles of Caribbean swimming and the top swimmers at this event can compete with top swimmers across the world in their age groups.

Stephen expressed “extreme disappointment with the refusal of the Government and the National Lottery to lend any support to the CARIFTA swimming team representing SVG in 2016 and in fact noted that the SVGSF has yet to receive a response from our letter of December 2015 requesting assistance,” the Federation said in a statement.

The next national team event for Team SVG is the Caribbean Islands Swimming Championships (CISC) to be held in the Bahamas in late June 2016. CISC is the next level up from CARIFTA.

“It is our sincere hope that the Government and the National Lottery will support our great young swimmers at CISC as they continue to make us proud with their efforts,” the Federation said.

The statement quoted Joachim as saying, “There are very few examples to our youth of fellow young people working really hard with great discipline and showing tremendous success in the field of sports. Surely this effort should be supported by the Government.”