Man jailed for possession of 106lbs of weed 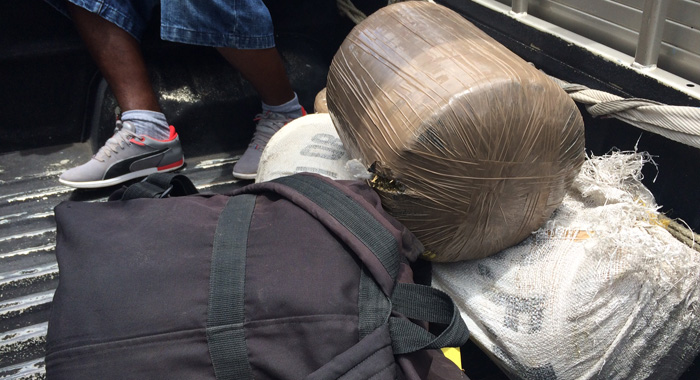 The taped packages in which the marijuana was found. (IWN photo)

A Rillan Hill man will spend the next two years in jail for possession of 106 pounds of marijuana.

James Lewis, a 29-year-old welder, asked to change his plea to guilty when he re-appeared before Chief Magistrate, Rechanne Browne Matthias on Tuesday.

Lewis, who is also known as “Little Man”, was arrested on March 10.

A party of officers from the Rapid Response Unit executed a search warrant at Lewis’ house in Rillan Hill around 5:20 a.m. on that day.

The officers found a nylon sack, a black knapsack, a black plastic bag, and two brown taped packages under a bed on the upper floor of the two-storey house.

The packages were found to contain plant-like material resembling cannabis.

The court heard that James was cautioned and he told officers, “That is my weed. I try to hustle it off so that I can take care of my son.”

He was arrested and taken to the Drug Squad base, where the packages were weighed.

After he changed his plea to guilty, the magistrate asked Lewis, who was not represented by an attorney, to stand down so that she could consider what sentence to pass on him.

During the sentencing phase, Lewis asked the magistrate to impose a fine and grant him some time to pay.

“You need to find some money today,” the magistrate responded.

“This is a lot of drugs. A term of imprisonment seems heavy in my consideration,” the magistrate further commented.

“It is a lot, a lot of cannabis,” she said, before asking Lewis to stand down to give her more time to “ponder”.

When Lewis was recalled, he told the court he is the father of three children, who live with their mother.

The magistrate noted the quantity of drugs and said she is not minded to impose a fine in the circumstances.

She sentenced Lewis to two years in prison, noting that Lewis can appeal his sentence, and ordered that the drugs be destroyed.

2 replies on “Man jailed for possession of 106lbs of weed”