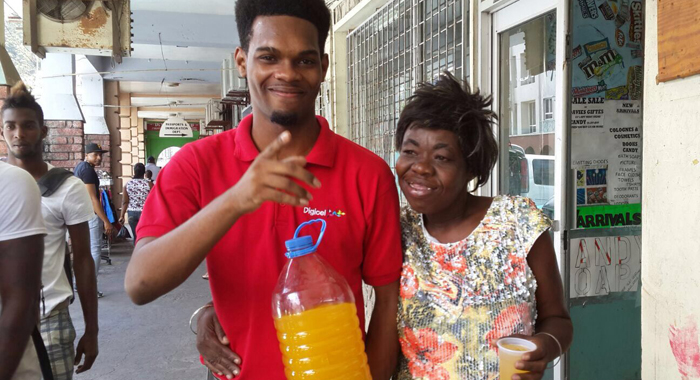 Digicel SVG has announced the launch of its community outreach programme tag named Digi C.O.R.P. Every month one community will receive assistance either for individuals or for the community on a whole.

While the community outreach programmes will range in size and scope, Digicel said it will ensure that they all produce the same results: spreading good throughout a community.

Digicel says it has been known over the years as one of the companies that give back.

It said that while these efforts have not diminished, with the official launch it wants to ensure that a structured plan is in place so that all Vincentians can benefit from the goodwill of the company.

On March 24, as a precursor to the launch of Digi C.O.R.P., thousands of Vincentians were surprised and overwhelmed with the outpouring of care from the company, Digicel said in a statement.

Digicel staff stopped buses en route to Kingstown and paid the full fare for passenger from their destination to Kingstown.

Digicel staff members also walked up to surprised shoppers in select supermarkets to pay for their groceries, filled gas tanks, paid VINLEC and CWSA utility bills, gave free credit away all day on radio, donated funds to the Schools for Children with Special Needs, and fed the needy around Kingstown.

Also, as part of the company’s 13th anniversary celebrations customers topping up received $13 back in credit instantly and postpaid customers paying their bills received instant discounts.

Commenting on last week’s exercise, Head of Mobile Operations, Dionne Emtage said: “The response was overwhelming; our staff couldn’t go in and about Kingstown without a throng of persons approaching them. Today more than one week later people are still enquiring and commenting of what we did not only for our customers but for the people of St. Vincent and the Grenadines on a whole.”

She said the company receives hundreds of sponsorship requests each month, and it always a challenge for to prioritise them. “However, as good corporate citizens ultimately we want to do what is best for the people of SVG. Digicel as a company is built on core pillars. Community involvement is one of these with central focus. We are one among the very few companies that give back to the communities where we exist without any commercial expectation in return. On a wider scale, we have built hundreds of schools in Haiti, donated hundreds of thousands to disaster struck areas and islands and we have developed local community heroes such as Usain Bolt to help accelerate their paths to success. Now we at Digicel SVG are excited to bring this home,” Emtage said.

Digicel says it will be focusing on the development of education, community, sports, music, youth and special needs.

One major project will be executed per month with the assistance of staff and external contractors where necessary.

Digicel customers can also text in a project that they would like the company to execute for their communities to the short code that will be published in the following weeks.