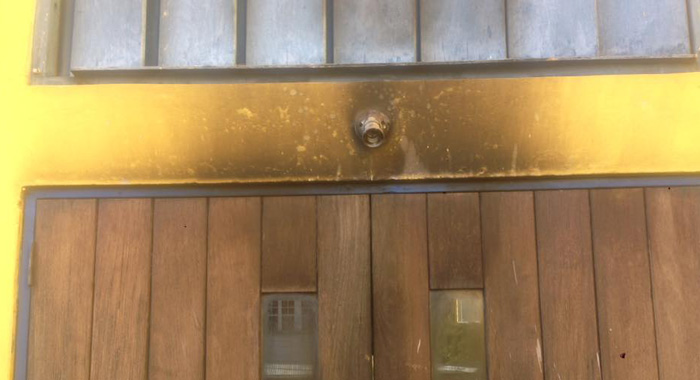 The NDP said three areas of its headquarters showed evidence of attempts to start a fire. (NDP photo)

The opposition New Democratic Party (NDP) said Tuesday night that there had been what appeared to be attempts to burn its headquarters, Democrat House, on Murray’s Road, Kingstown.

NDP President and Leader of the Opposition Arnhim Eustace made the announcement on radio Tuesday night, saying his party was “abhorred” by the development.

He said the attempts were made sometime late Monday and early Tuesday.

“Our staff discovered broken fragments of glass as well as burnt out bottle tops from what appears to be vanilla essence bottles. From the appearances, attempts were made at starting a fire at three different doorways,” Eustace said.

He said that on discovery of “the worrying evidence”, the executive members of the party as well as the police were immediately notified.

“The police came and are now conducting their investigations. We await the conduct of these investigations, and a speedy, efficient and professional conclusion that will lead to arrest(s) in this matter.”

Eustace said that the NDP makes “no broad assumptions as to who may want to have our headquarters burnt down”.

He, however, noted that the apparent attempts at arson follow “a recent history of mysterious fires within the city and surrounding areas — and the fact that there has been no significant breakthroughs in any of them”.

Since the beginning of this year, there has been an attempt to firebomb VINLEC, the state-owned electricity company.

Prime Minister Ralph Gonsalves has suggested that the fire was an act of arson, but no arrest has been made.

Eustace also noted that the apparent attempts to burn the NDP’s headquarters took place on the day that the court refused an application by the government to throw out two NDP petitions as improperly filed.

“It might be significant or mere coincidental that the attempt apparently took place hours after a court ruling in the elections petitions case, and our declaration to move forward with the challenge to the results,” Eustace said.

He said that in his public comments Tuesday, he made reference to newly discovered information that could significantly affect the case and that the party preparing documentation in that regard.

“In this era of heightened political tension, we call on all of our friends and supporters to be eternally vigilant,” Eustace said.