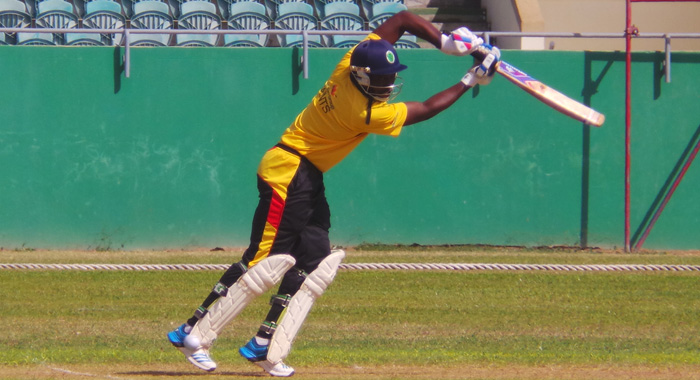 Rickford Walker made an attacking 75.

Guardian General Saints gave a compelling indication of their intention to land a first Premier Division title in their history with an emphatic innings defeat of News Spartans at the main Arnos Vale Playing Field in the National Lotteries Authority competition on the weekend.

Losing the toss and being asked to bowl in steamy conditions and on a good wicket, Guardian General Saints looked set for a long afternoon in the field when openers Gidron Pope and Kurtland Lavia overcame some early challenges posed by former West Indies left-arm seamer Kenroy Peters with the new ball.

The pair batted until the 15th over, when Lavia (31) who surprisingly was the more aggressive of the two, was LBW by offspinner Kelon Davis (3/37) with the total on 57.

Pope the West Indies U19 opener who batted confidently in his near two-hour stay while curbing his attacking nature hit a topscore of 38 and was sixth out. He batted 113 minutes, faced 82 balls and struck 6 fours. Currency a part-time offspinner proved to be the main destroyer with figures 9.2-1-25-5.

On Sunday, led by attacking half centuries from Rickford Walker (75) and Currency (55*), Guardian General Saints declared 258/5 at lunch.

Walker, a tall right-hander, struck 14 fours off the 53 balls he faced during his stay at the crease, while Currency counted 3 fours and 2 sixes in his knock. Windwards Volcanoes top order batsman, Sunil Ambris and Jeron John both got 36.

The News Spartans batting a second time and with a deficit of 158, got off to the worst possible starts when Pope (0) drove Peters’ fifth ball to gully to be easily caught to make the score 0/1. It was a blow from which they never recovered as they were all out for 82 in 23 over with Currency 4/26 once again leading the way as Guardian General Saints won by an innings and 76 runs.