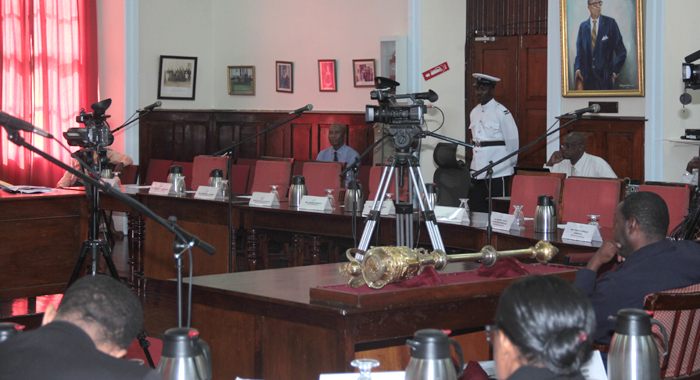 Empty opposition benches during a meeting of Parliament in January 2016. (IWN photo)

Prime Minister Ralph Gonsalves has described as “a grave dereliction of duty” the failure of the parliamentary opposition to attend Tuesday’s meeting of Parliament, during which a bill was passed relating to the nation’s geothermal energy development.

The Geothermal Energy Development (Loan Authorisation) Bill, 2016, which was passed into law, authorises the government to access a US$15 million loan from the Abu Dhabi Fund for Development to help set up a geothermal power station in St. Vincent and the Grenadines (SVG).

Gonsalves told government lawmakers and media audiences that other bills passed on that day, including increasing the Governor General’s housing allowance, were merely tidying up administrative matters and were likely to garner the support of opposition Members of Parliament if they were present.

He, however said, the geothermal energy project, which he described as game changing initiative, was a subject of immense importance to the country.

“For the opposition to yet again be absent is a grave dereliction of duty,” Gonsalves said.

The opposition New Democratic Party (NDP) is boycotting Parliament as part of their rejection of the results of the Dec. 9 general elections, which they said Gonsalves’ Unity Labour Party stole.

Gonsalves noted the results of the elections when he spoke in Parliament on Tuesday, during which session he also tabled the report on the poll.

“Persons in seven constituencies out of 15 returned the opposition Members to Parliament. Those representatives have an obligation, a legal and a moral obligation to be here to represent the people,” Gonsalves told Parliament.

He said opposition lawmaker also have a legal and moral obligation to represent those persons who voted for them in the constituencies that they did not win.

Gonsalves said that democracy is founded on several principles, including the rule of law and representative government.

Representative government, he said, means the holding of free elections for persons 18 and older, and, in open debate, free of violence, they take the right of their secret ballot and cast their vote to send representatives to the national assembly.

Gonsalves said the independent office of the Supervisor of Election conducted the elections, noting that he, the minister of electoral affairs, reported to the House of Assembly on the outcome of the election.

“It is the duty — moral, legal and political duty — for the opposition members to be here. The challenge of two representatives who have been returned, respectively in North Windward and Central Leeward, that legal challenge, is perfectly doable within the laws of this country. But what happen? The opposition can’t walk and chew gum at the same time? You can’t make an application to the court about two constituencies and yet, at the same time, come to the Parliament?” Gonsalves said.

The NDP has filed petitions challenging the results in North Windward and Central Leeward.

In a judgement on Monday, High Court judge, Justice Brian Cottle, ruled as premature an application by the government to throw out the petitions as improperly filed.

Cottle, however, said that having heard the arguments, he is persuaded that the government is bound to succeed if it applies at the start of the trial for the petitions to be thrown out.

“What are you now being at war with?” Gonsalves said, and accused the NDP of being at war with Supervisor of Elections, the courts, and the reports from the Commonwealth, the Organisation of American States, CARICOM and the Christian Council.