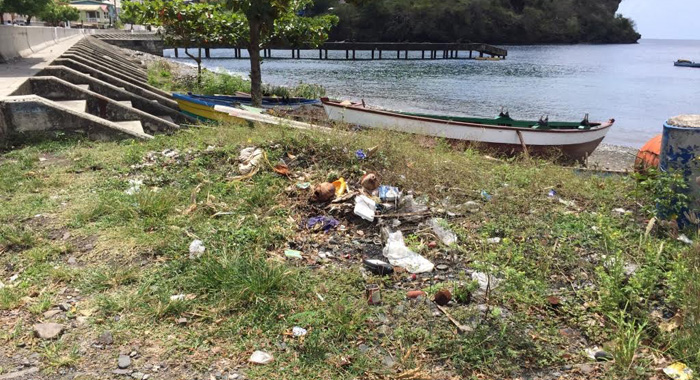 A heap of garbage on the Layou Waterfront.

Readers of iWitness News are concerned about many things, including degradation of the environment.

Over the past weeks, some of our readers have sent to us photos of wanton disregard for the natural environment in St. Vincent and the Grenadines.

This was manifested in the removal of sand from beaches and the indiscriminate dumping of garbage in one of the nation’s towns.

We hope those photos will help to shed some light on the problems and cause those responsible to act individually and collectively to address them.

We hope those photos will help to shed some light on the problems and cause those responsible to act individually and collectively to address them.

Joel Poyer, a forest technician, had addressed some of these issues in an interview with iWitness News.

Mining sand on some beaches in St. Vincent continues to be legal, and in some cases is carried out by the government.

“I think it should be stopped all together. It’s a no-no,” Poyer said, adding that there are areas inland where sand deposited by a river flowing out of the volcano in the Richmond area can be mined.

Prime Minister Gonsalves has said the public policy of his government “is that we prohibit the removal of sand from beaches, save and expect one or two specified places, and that is also controlled”.

He, however, saw the logic of a policy introduced some two decades ago by then Prime Minister James Mitchell who wanted an outright ban on the removal of sand from beaches, and ordered that only imported sand be used for government projects.

Gonsalves has noted that many citizens had complained because the policy would have resulted in higher construction cost.

“But I think what he said was wise, because the beaches are important to us and the place is being eroded, particularly on the eastern side of the island. And the wave action is terrible and we have to spend a lot of money on sea defences and so forth.”

4 replies on “IN PHOTOS: Environmental degradation in St. Vincent”