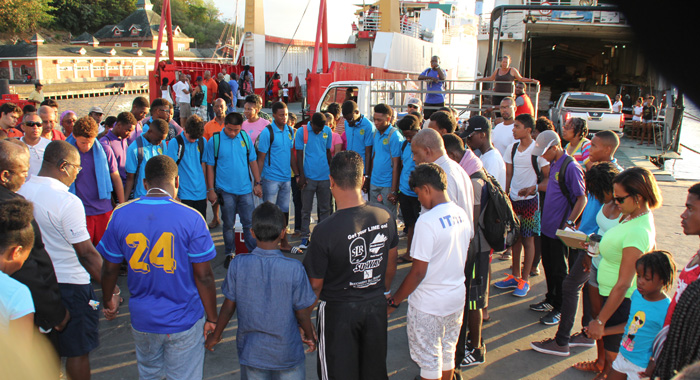 The Young Leader along with relatives, friends, education officials, and counsellors at the Grenadines Wharf after their return to Kingstown Saturday afternoon. (IWN Photo)

A 15-year-old student of the St. Vincent Grammar School drowned in Bequia on Saturday, bringing to four the number of persons who have drowned in St. Vincent and the Grenadines over three weeks.

Akeili Latham of North Union became the second student to drown here during that period.

He died during a visit to Bequia with members of his school’s Young Leaders group.

Principal of the Grammar School, Curtis King, told iWitness News on Sunday that he was not in a position to comment in a detailed manner on the tragedy, as he was yet to receive a full report.

He, however, confirmed that the students, along with teachers, had gone to the northern Grenadine island as part of their Young Leaders project, which is in the closing stages.

King said his efforts and those of the school since the tragedy have been focused on responding to the emotional and other needs of the students directly affected.

The principal said he plans to visit the dead student’s parents later on Sunday.

Snippets of what occurred in Bequia have been gleaned from posts on social media.

Mandela King, a Grammar School student, wrote of the tragedy on his Facebook page, saying, “… I watched the doctor trying to help u on the sand and give u CPR but it was not working, I just had to sit on the sand and shed tears I just can’t believe it but Gods knows best. You still have to give him praise RIP bro”.

Eetonia Devinelymade Hazell, commenting on an iWitness News breaking news post on Facebook about the tragedy, said she was made aware of what happened when she saw the crowd at the beach.

“i felt sad but i held on to hope when d ambulance arrived but only to b saddened later by d news…i dont knw him but i feel for him n more so his family…..

“But to those white foreigners (n locals if any) who i saw went to his aid may God bless them for their bravery n act of selflessness… we need to b more watchful n vigilant…. it wasn’t a nice scene at d beach today,” she wrote.

There were raw outpourings of grief and emotions at the Grenadines Wharf when the group returned to Kingstown late Saturday afternoon.

They gathered with parents, relatives, friends, officials from the Ministry of Education, counsellors, and Monsignor Michael Stewart of the Catholic Church.

She told those directly affected that they do not have to go through the grief alone, adding that they have the support the adults and counsellors.

The St. Vincent Grammar School Young Leaders have been engaged in a number of activities as part of their 2016 programme whose theme is “Me…You…We…A shared vision for a better society”.

The school has adopted the sub-theme “#Knowyourselfknowyourworth.”

The school’s Young Leaders visited 10 schools — six primary and four secondary — on Feb. 18 to discuss their sub-theme with fellow student.

They visited the Murray’s Village community and Liberty Lodge Boys Training Center on March 19 and initiated their mentorship programme, “Care and Protection” in which the Grammar School students partner with Liberty Lodge students to develop meaningful relationships that will support the youth.

Four days earlier, on Sunday April 3, an elderly man, said to be from North Windward, drowned at Canash beach.