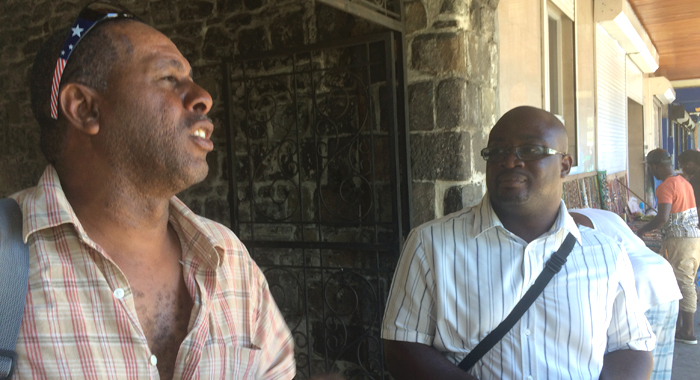 Terry Bynoe and Duane Lewis of the Canouan Island Development Council chat in Kingstown on Monday after their meeting with government officials. (IWN photo)

An hours-long meeting between activists from Canouan and government officials on Monday failed to produce an agreement addressing the issue of access to beaches on the southern Grenadine island.

The Canouan Island Development Council (CIDC) had requested a meeting with the government over the longstanding issue of access to beach on the island, two-thirds of which have been leased to investors.

“It’s basically what I expected we would have heard because I’ve seen in many press conferences the Prime Minister would have taken a decision for all to be calm and we have to protect the investment and the investors,” president of the CIDC told iWitness News after the talks in Kingstown.

“I didn’t expect anything to be concrete from this meeting because, obviously, they have to take it back to the prime minister, I believe” Bynoe further said after the meeting between the CIDC and Permanent Secretary in the Ministry of Nationals Security, Godfred Pompey, and Director of Grenadines Affairs, Edwin Snagg.

“… we hope that when they come for the town hall meeting they will have more concrete answers for the people of Canouan,” he said.

In addition to Bynoe, the CIDC was represented at the meeting by First and Third Vice-President, Duane Lewis and Peter Laidlow, and treasurer, Zico Garraway.

Bynoe said the CIDC representatives were told that the developers have decided that arrangements can be made, if people call, to have them transported to the beach.

“I have made my position clear on that matter. I have quoted Mr. Parnell Campbell on the Law and You about access to public beaches to them. They stuck to their arrangement, of sorts,” Bynoe told iWitness News.

The CIDC proposed that they try to solve the problem of driving through the resort to go to the beach by having a boardwalk from Twin Bay to Godhal and the same from Ghodal to Careenage.

Bynoe said the government officials said they would explore that suggestion.

“If they turn that one down, it will tell us that we really don’t want to be seen in the developed property,” he said.

(Watch below a video from February on the beach access issues)

The activist said he would be happy with a boardwalk if it includes a one-lane concrete strip wide enough to accommodate a golf cart but not a car or other vehicles.

“So if you have little things, a golf cart can move it from one point to the next and persons can walk. I think that is a good way of dealing with that problem. So, I guess we will see.”

Bynoe said the meeting was “a little tense at time, [but] mostly calm”.

“We asked the questions that the public raised with us in town hall meetings. We got them out; we got some responses. We will now sit with the team, discuss this with the members who were not present and then we will move towards a town hall meeting to inform the public as to some of the answers we got from the government.”

He said that in addition to beach access, the CIDC told the government officials, both of whom are originally from the Southern Grenadines, that the roads on the island are in a deplorable situation.

They were told that investors will be spending some $20 million in “the village” — the section of the island where the indigenous population lives.

The CIDC was also concerned about healthcare and asked that the clinic be upgraded, maybe to a smart hospital.

“Because we are central in the Grenadines and things like [a] dentist — a simple toothache can cost you a charter flight [to Kingstown], depending on how bad it is,” Bynoe told iWitness News.

We spoke about healthcare, education, a secondary school. We were told that an education complex would be built. That is part of the plans on the table maybe with the government and the investors.”

The island’s representatives also raised the issue of jobs and Barbadian workers on the island and were told that that would be looked into.

“Se we are basically waiting for this public meeting, maybe next month, so that the public can direct a lot of questions to them (government) themselves and they will get the feedback from the public.”

The CIDC has called a meeting of Canouan residents for Thursday to report on the discussions with the government.

The meeting is slated for 7 p.m. at the Society Hall in Canouan.