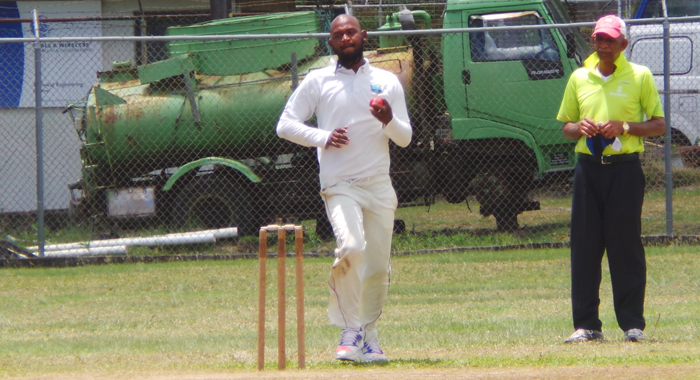 Captain Asif Hooper, with a 10-wicket match haul, led from the front in piloting defending champions, Team Rivals to a comprehensive innings and 17 runs victory over Police 2 in their NLA Premier Division match at the Sion Hill Playing Field on the weekend.

Winning the toss and batting, Team Rivals, behind impressive half centuries from Harley Skeritt (78) and Casmond Walters (73), posted a workable total of 249 after recovering from 87/4.

The recovery was led by Walters and Skerrit. who added 97 for the fifth wicket on a good batting surface. Walters, though, was the beneficiary of a number of chances including two missed runout opportunities and made full capital.

The pair also found some difficulty in handling offspinner Kenneth Dembar (5/70), who used his height to full advantage in extracting turn and bounce from the wicket.

Walters was first to go when he was LBW by Dembar as he attempted to turn to the legside. He struck 9 fours and 2 sixes.

Skerrit, who looked set for a century, gave it away trying to attack Dembar and went with the total 241/7. Pacer Romario Bibby (4/49) then returned to mop up the lower order.

Police 2 ended the day 34/3 a position from which they never recovered with left-arm spinner Hooper who opened bowling taking two and offspinner Walters the other.

On Sunday, they were bundled out for 79, with Salvan Browne (31*), who batted down the order getting the topscore. Hooper, bowling left-arm spin, returned figures of 5/29 and offspinner Walters 2/13. The innings lasted 19 overs and was completed within an hour on Sunday.

Police 2, asked to follow on, got off to a terrible start when Browne (0) was caught off his fourth ball with the total on naught.

Dembar (26) looked to keep the innings alive, but, aided by a series of poor shots, the lawmen made a persistent effort to dig themselves into trouble. Kevin Abraham (27), with the departure of Dembar, batted responsibly while his other teammates went about giving their wicket away. Abraham’s resistance came to an end when he was run out by his partner who ignored a call for a single.

A few lusty blows from the lower order, all of whom got into double figures, only served to delay the inevitable which came just after tea with the total 153 made in 37.2 overs.