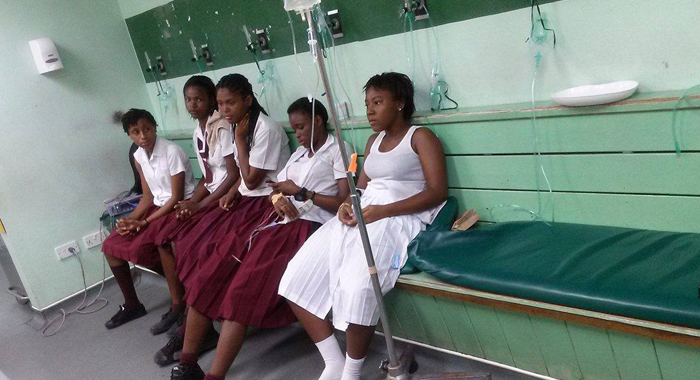 A number of students were treated in hospital and discharged.

The principal and some nine students of the Buccament Bay Secondary School were rushed to hospital on Wednesday and treated for vomiting and coughing.

The Ministry of Education ordered that the school remain close on Thursday and reopen Friday morning (today), saying that a fire nearby had affected the school population.

But some persons, including students at the school and residents of the Central Leeward community, have doubted that the development at the school was as a result of a fire.

They say the fire — the burning of plant material outside the school walls — took place sometime after 8 a.m. and persons began falling ill sometime after 2 p.m., after a student began behaving “strangely”.

“They were saying the girl open a bag with something. And when they were getting sick she was laughing and she had a Bible turn over her head and walking around with it on her head,” one source told iWitness News.

The persons affected were treated at the Accident and Emergency Department of the Milton Cato Memorial Hospital on Wednesday.

A source who visited one of the students at the hospital, told iWitness News:

“The doctors were saying they can’t figure out what caused it.”

The source said their relative’s eyes and mouth was swollen and she fainted and had dryness in the throat.

Some residents of Buccament Bay suggested that what took place at the school was a case of mass hysteria.