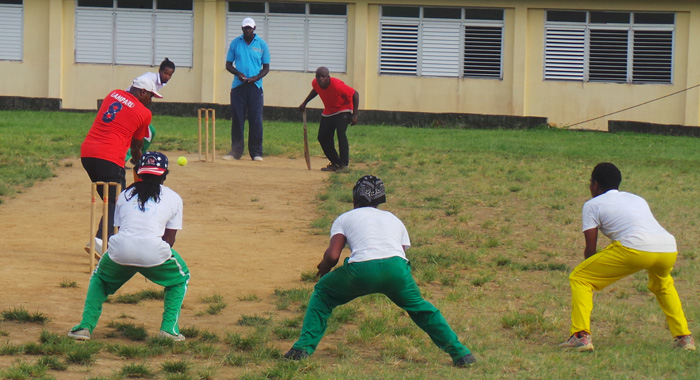 Smashers, asked to take first knock, reached 124/7 off their 20 overs with Delano Woodley getting a topscore of 34, which included 3 sixes and a solitary 4 as Shawn Williams took 3/10 and Shanly Lavia 2/20.

Sion Hill Tallawahs were dismissed for 76 in 15 overs with Shamic Roberts getting 29 and Glendon James taking 5/20 and Anthony John 2/6.

The other scheduled match between CGM Gallagher Novice and KLT Strikers saw Novice getting the points after KLT Strikers failed to field a team at match time.

On Sunday, We Come Back Street Fighters were in dominant mood as they rushed to comfortable wins over their opponents.

In the first match, they defeated Mt. Pleasant Strikers by nine wickets.

Batting first, Mt. Pleasant Strikers were dismissed for 62 in 17.1 overs, with Marley Duncan 3/6 and Ricardo Thomas 3/16 doing the damage.

We Come Back Street Fighters then chased down the target with ruthless efficiency to reach 65/1 in eight overs with Ozzni Bellingy 27* and Marley Duncan 26* seeing them home.

In their second match of the day We Come Back Street Fighters defeated Snipers Reload by 95 runs.

We Come Back Street Fighters, behind a punishing half century from captain Ozzni Bellingy, reached 144/9 in their 20 overs.

The powerfully built Bellingy struck 7 sixes and 2 fours in his innings of 54, while Antonio Barker made 31*. Elford Adams took 3/13 from his four overs.

Snipers Reload found an elusive target in their response and fell for 49 in 16 overs with Jerando Jardine getting 20.

The Sea Operations nar Fren Dem/ Gomea Bombers was rescheduled following a last minute request by one of the teams.