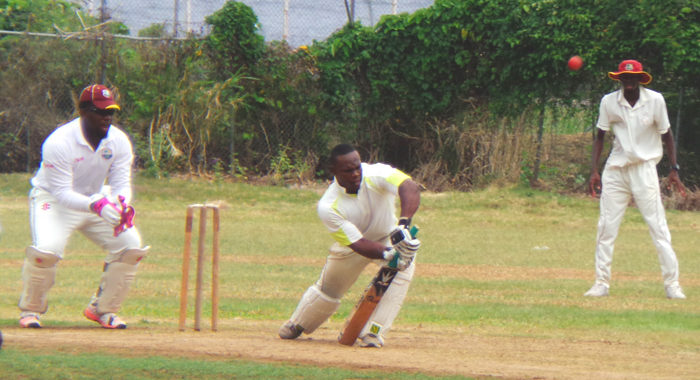 Winning the toss and choosing to bat, Team Rivals showed their virtue as a team with a desire to bat sensibly and raise useful partnerships throughout the innings.

The innings, however, was built around another impressive half century by the mercurial Hyron Shallow.

He went to the wicket in the second over after Marvin Small (0) edged Kimali Williams behind with the total on 6.

The diminutive Shallow, his usual nerve-wracking running between the wicket aside, played with a straight bat on a pitch that offered some sideways movement early on.

The big-hitting Roneil Jeffrey got 36 in the middle while opener Asif Hooper got 32 at the top.

Guardian General Saints, who were still entertaining memories of the previous weekend’s humiliation at the hands of LIME Radcliffe, once again failed to fire and were shot out for 122 in 29 overs with Rickford Walker getting a topscore of 58.  Walker struck 4 fours and 3 sixes but received little support from the rest of the batting.

It was once again the ebullient Orlanzo Jackson 4/30 with good support from Hooper 3/31 and Casmond Walters 2/25 which accounted for the batting misery.

Team Rivals, with a handy lead of 71, quickly went in search of a declaration and reached 115/3 in their a second innings with Small getting 63 before calling a halt to their ininings.

Set 187 for victory, Guardian General Saints were once more let down by their batters and were quickly dismissed for 128 in 33.2 overs with Jerron John’s 31 being the topscore.

Hooper took 4/31 with his left-arm spin and was backed up by Jeffrey 2/4 and West Indies U19 pacer Obed McCoy 2/35 to bowl their tem to a resounding victory.