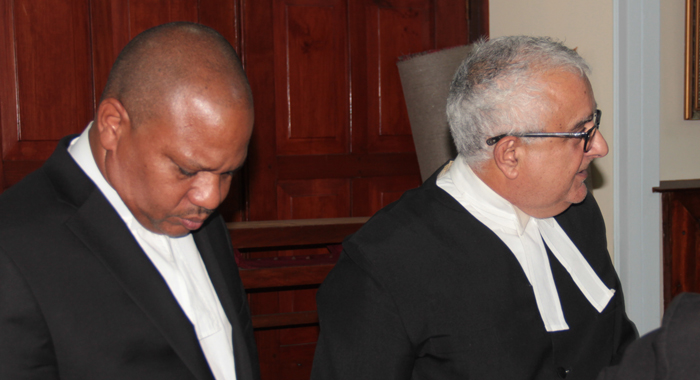 Two of the lawyers for the respondents, Anthony Astaphan, QC, right, and Richard Williams. (IWN photo)

A senior lawyer representing the respondents in the election petitions now before the High Court says he disagrees with the view that the petitions should be allowed to be ventilated in court.

“Respectfully, I don’t share that view,” Dominica Queen’s Counsel, Anthony Astaphan told reporters on Thursday after a court hearing in Kingstown on the petitions.

“That view is based on a very flawed understanding of the facts, a deliberate refusal to accept the fact that they had three sets of international and regional observers here for the election that said the elections were free and fair, and it is a profound lack of understanding of the nature of the election law, which requires that there be strict compliance with condition precedent before you can get to a trial,” Astaphan said.

In the election petitions, the opposition New Democratic Party is asking the court to declare its candidates the winners in North Windward or Central Leeward or order fresh elections in those districts.

However, the respondents say that the petitions are not properly before they court, because they lack inadequate security.

Some persons have argued that the respondent should allow the court to hear the cases, saying that if they are not of merit, they will fall along the way.

“All we are doing is following the law. There is no trickery here, there is no voodoo economics, there is no obeah (witchcraft) or magic. We are really sticking to the facts and to the law and I think we are entitled to do that as other election officers in the Caribbean have done that,” he said.

“Recently, a case in Trinidad was thrown out — I am also assisting the PNM in their petitions over there — on the basis of a delay of service of one day or two days,” he said.