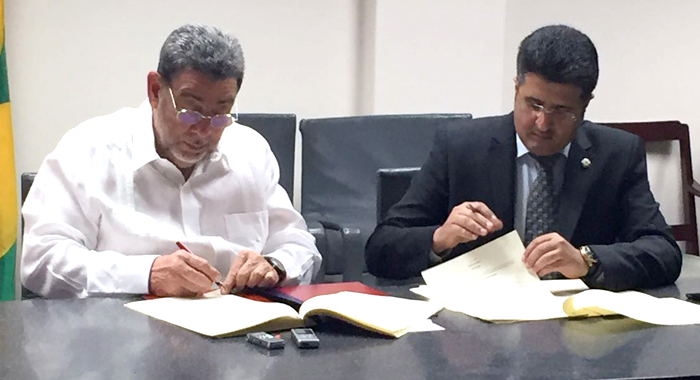 Prime Minister of SVG Ralph Gonsalves, left, and the head of Agreements and International Relations, Department of Air Transport and Airport Affairs, Mohammed Faleh Alhajri of the Qatar Civil Aviation Authority on 12 May 2016.

St. Vincent and the Grenadines (SVG) and Qatar on Thursday signed an air services agreement, paving the way for airlines to operate any number of flights between both countries without any restrictions.

Prime Minister Ralph Gonsalves signed on behalf of SVG and the Head of Agreements and International Relations, Department of Air Transport and Airport Affairs, Mohammed Faleh Alhajri of the Qatar Civil Aviation Authority signed on behalf of the Arab nation.

Gonsalves expressed gratitude to the Qatari government for offering their services to SVG. He said Alhajri will “secure the approval of his Cabinet” on his return to Qatar.

Likewise, Gonsalves will seek the approval of Cabinet in SVG on the agreement.

The prime minister said he would be invited to Qatar for formal signing in that country.

Gonsalves extended gratitude to the Emir of Qatar and his government for coming to an agreement with the Government and people of SVG, on air services.

He also expressed gratitude to the “technical persons from Qatar and also from St. Vincent and the Grenadines for their tremendous work in concluding the memorandum and the agreement”.

Gonsalves said the Argyle International Airport will begin operating soon, adding that it is important for the country to have air services agreements “with a number of countries with which we are friendly and which have shown interest in the development of our country and for us to have this as the framework for the actual, possible operations of air services”.

In reply, Alhajri extended thanks to Gonsalves for “his warm reception and kind hospitality” and expressed pride in the signing of the air services, noting that Qatar is the first Arab country to do sign such agreement.